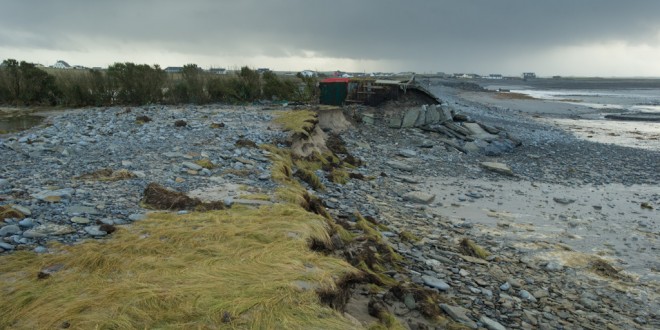 A view of some of the coastal erosion at Quilty caused by last year's flooding. Photograph by John Kelly.

COUNTY Clare is once again counting the cost of storm and flood damage after the spring tides brought their expected fall-out in many coastal areas on St Bridget’s Day.

A  Met Éireann weather warning remains in place for this Saturday night.

Many road were impassable this morning, while thousands of homes, mainly in  North and Mid-Clare, were left without power.

The Cliffs of Moher Visitor Centre remains closed all day due to hazardous conditions there.

Things came to a head about 6 o’clock this morning, when the sea surged in at Lahinch Promenade and Quilty, while the Strandline wall in Kilkee  was  also damaged.

This time round, Killimer and Moyasta were badly affected along the estuary.

Flooding also occurred at Clarecastle bridge, as well as on the road at Bunratty. The river at the Black Weir Bridge, near the Clare Inn, burst its banks, while the main Ennis to Kildysart Road, at Ballicorrick also flooded.

Further flooding has been reported in respect of roads and land at many areas all over the county.