Home » Sports » Clare back in the top division 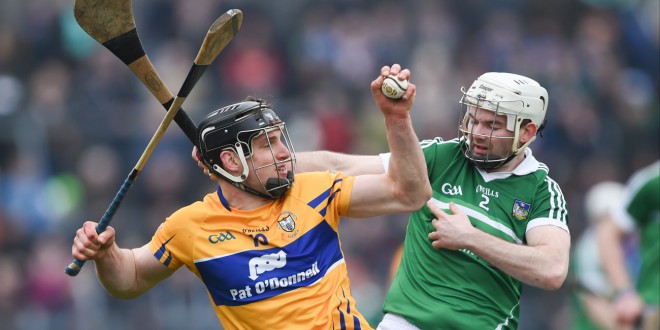 John Conlon of Clare in action against Tom Condon of Limerick during their Div. 1b Round 5 game in Cusack park. Photograph by John Kelly.

Clare back in the top division

Clare are back in the top grouping in the National hurling league following a comfortable win over arch rivals Limerick at Cusac Park this Sunday afternoon.

The Banner side’s victory was much more comfortable that the final scoreline suggests on a day when Limerick were reduced to fourteen men five minutes before half time whenforward Barry Nash picked up a second yellow card.

Clare led from the outset on a day when they shot no fewer than nineteen wides, a dozen of which came in the second half.

Played before an attendance of 8,847, the home side made their intentions known from the off and struck for the game’s only goal as early as the opening minute when John Conlon brillantly grabbed a high delivery before shooting to the net. The score clearly rocked the visitors who, underatandably, complained tht the Clonlara player took more thatn the required number of steps while in possession before finding the net

Already through to the quarter finals before Sunday’s clash, it was anticipated that the great Munster rivals would produce a contest to remember but this did not prove to be the case. Clare were, simply,much stronger throughout the pitch and emerged as fully merited winners. They now go on to play Tipperary in a league qurter final tie in two weeks time and the venue will be decided by a toss on this Monday. Meanwhile, Limerick must put this disappointment behind them and prepare to face Dublin in a quarter final tie

While being a man short was, clearly, a disadvantage, its fair to say that prior to the dismissal, Clare dominated in almost all sectors and this was the case throughout and they would not have been flattered by a much greater winning margin

After Conlon’s goal, Conor McGrath and David Reidy added Clare points before the visitors opened their account through Graeme Mulcahy in the seventh minute. As the game entered the second quarter it was 1-5 to 0-3 in Clare’s favour. Three Declan Hannon pointed frees brought the visitors to within two points of the winners but Clare finished the half strongly with points from David McInerney and two from Bobby Duggan frees to lead by four at the break when the score was 1-10 to 0-9.

For the second halfLimerick brought in Paudie O’Brien and James Ryan in an effort to improve their lot but Clare took up where they had left off and hit the opening three points to stretch their lead to seven. However, as the half progressed, Clare failed to convert a lot of opportunities—they had twelve wides in this half—and this allowed Limerick to remain in contention.

The Clare defence dominated throughout and coughed up few scoring chances on a day when four of the visitor’s starting forward line failed to get on the scoresheet. Declan Hanon was their scorer in chief with all but one of his tally of 0-9 coming from placed balls.