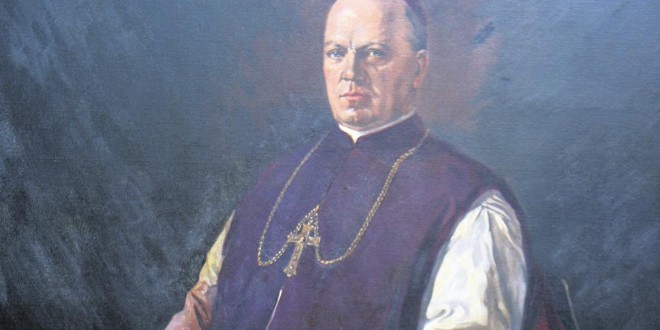 A portrait of a highly influential County Clare ecclesiastical figure is to be auctioned next week. It is that of Archbishop Joseph Clune of Perth, Western Australia, a native of Ruan.

The portait, on canvas measuring 72 x 54 inches, is signed and dated on the lower left, Leo Whelan, 1913. It will go under the hammer on Wednesday next at 7pm at Sheppard’s Irish Auction House in Durrow, County Laois and, according to the auctioneers, is expected to fetch in the region of €1,500 – €2,500.

Patrick Joseph Clune, DD CSsR, was born on January 6, 1864 in Ruan and died on May 24, 1935 in Perth. He was the fourth Roman Catholic Bishop of Perth and first Archbishop of Perth, serving continously in these roles from 1910 to 1935.

Educated at the local national school and at St Flannan’s College in Ennis, in 1879 he entered the Catholic Missionary All Hallows College in Dublin to study for the priesthood. He was ordained in 1886, aged 22. His first appointment was to St Patrick’s College, Goulburn in New South Wales. He professed vows as a member of the Congregation of the Most Holy Redeemer (Redemptorists) on September 13,1894.

Patrick Clune was consecrated a bishop by Cardinal Patrick Moran on St Patrick’s Day, 1911. In 1913, he was elevated to the role of archbishop, the first such position available in Perth.

Prior to December 1920, Archbishop Clune acted as an intermediary between Lloyd-George and the Irish leaders during the Irish War of Independence. He had a strong personal interest in the outcome since his nephew, Conor Clune, had been executed by the British in what seems to have been a case of mistaken identity.

He played a significant role in the split of Christian Brothers College, Perth to form Aquinas College in the 1930s.

He died on May 24, 1935 and was buried in Karrakatta Cemetery. His remains were exhumed in June 2013 and reinterred in the crypt of St Mary’s Cathedral, Perth in September 2013.

Previous €4.4m Lotto win in Sixmilebridge
Next Think carefully when getting a pup