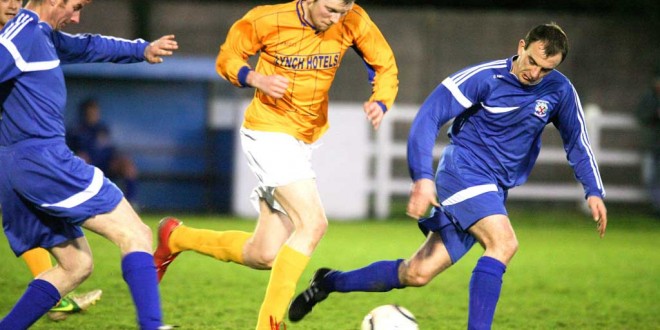 Clare's Colin Smythe gets away from Desmond League's Anthony Moloneux and John Keliher in their first round game. The draw has been made for the semi-final.

IT was mission accomplished as Clare’s junior soccer squad secured a quarter-final place in the Oscar Traynor inter-league competition, accounting for Desmond League at the County Grounds on Saturday evening.

The win sealed the team’s place at the top of the group, which puts them into the last eight of the competition.

The victory could have been much greater margin had they converted all the chances created, a fact team manager Liam Murphy attributed to Clare being uncomfortable in the role of favourites.
Desmond League, already out of contention, travelled to Doora with just 12 players and were forced to make a change shortly before half-time when John Kelleher was introduced in place of the injured Kieran Trander.

The visitors almost took the lead in the very first attack of the game. After just 30 seconds, Clare goalkeeper John Mulready was rather casual in clearing his line and almost paid the price. Seconds later, the action was at the other end where Desmond League goalie Patrick Stack saved from Stephen Hickey.

Hickey had his fair share of chances and it wasn’t any surprise that, when the opening score came after 25 minutes, it was the Ennis Town striker who applied the finish after good work by Stephen Kelly.

The winners could have had a couple of goals by this stage as Hickey, Eoin Hayes and Paddy O’Malley had all created opportunities. Hickey and team captain Dave McCarthy had also seen efforts rebound off the woodwork in the 17th minute.

The second half was just four minutes old when Clare doubled their lead, skipper McCarthy applying the finish to a move involving a number of players.

Clare continued to pile on the pressure with O’Malley, in particular, causing a lot of problems for the visitors.

Midway through the half, Hickey had a couple of great opportunities to extend the home side’s lead but failed to find the target.

In the end, there was no denying the merit of Clare’s win. Debutant O’Malley excelled, while Rhys Phillips, Eoin Hayes and Colin Smith, whose pile-driver in the second half was deflected by Stack onto the crossbar, were others to get through a lot of work.