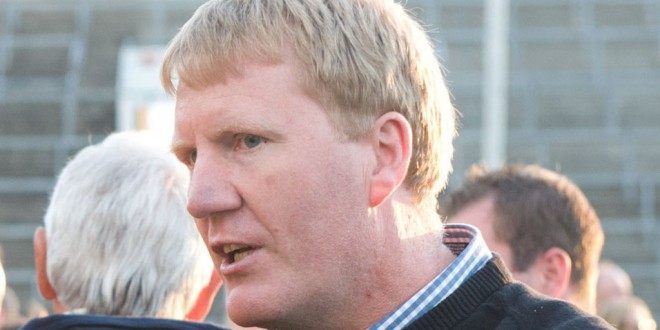 SEAMUS Clancy is picking up on increasingly positive vibes regarding Clare football. The Corofin man and 1992 All-Star feels that Clare can build on their 2014 promotion and have a decent 2015. However, he believes that the next step is to beat teams that they are not expected to defeat.

“I texted Colm Collins for the new year and I said thanks for what he had done last year. They did lift our spirits. It was unreal. There is certainly high optimism around. The first lift they got last year was a couple of guys, who had won All-Ireland medals, said ‘I want to play football for Clare. It means something to me.’ That lifted everyone in the county involved in football. That was a great lift. There were teams before that who were unlucky but when everything is right within a panel, they get the breaks. They got promoted and for this year the big one is to stay in Division 3, which will be a very high standard,” the former Clare corner-back warned.

“Clare showed last year that they can play with some of the teams at the top. They were very unlucky against Kildare and they ran Kerry very close. To do it regularly is the aim. They showed that they can beat good teams and run very good teams close. Now it’s a case of start getting big scalps and do it on a regular basis. That’s very hard because every football team out there thinks they can beat the next one.

Football is very difficult but they seem to have got some kind of a way of playing that’s hard to beat. They seem to know what they’re doing and they’re very organised. The players with the skill seem to be showing well. They’re getting good ball in and they’re benefiting from that,” Clancy has noticed.

From a Corofin viewpoint, he is very proud at the manner in which Jamie Malone, U-21 again this year, has progressed at senior inter-county level.

“Unreal. Colm Collins gave Jamie every chance. He developed him and didn’t say ‘we’ll play him and see what he’s like’. They could see potential in Jamie and they developed it. He has turned into an awesome player. He had a great year for them last year. He’s a big strong guy and he’ll develop even more. Jamie’s performances have lifted Corofin because he is now a leader for us. He’s showing that he is a leader with the county as well. I said it last year that management are looking at the long-term picture. They see a bit of potential in a player and they develop him. That gives a player great confidence in himself. He might say ‘I’m not going well today but they believe in me and I’ll get through this and get another day’. Rather than a fella being worried that he’s not going to make it, be dropped and be never heard of again,” Clancy reflected.

He has also been very impressed with Shane McGrath, whose father, John, the Corofin man played football with.

“Shane had a great year last year. What this Clare football team have is leaders. They have fellas that are standing up every day, showing a bit of steel and winning games. Another player I’ve been impressed by is Kevin Hartnett. He has pace to burn. The other players involved for a few years are playing with a lot more confidence now. There are good players around them but it’s getting harder and harder to make the team too, which is what you want,” he pointed out.

Clancy is clearly buoyed by what he has seen over the last 12 months, yet he insists that Clare must start getting results at underage level.

“The next step for Clare is to improve at U-21 and minor and get the development squads moving. If you have a good senior team, you have to build on that. You have guys now that want to make Clare teams so we as a county have to work on that and put the infrastructure in place so that these lads can play at a high standard,” the still blond-haired Clare football icon suggested.