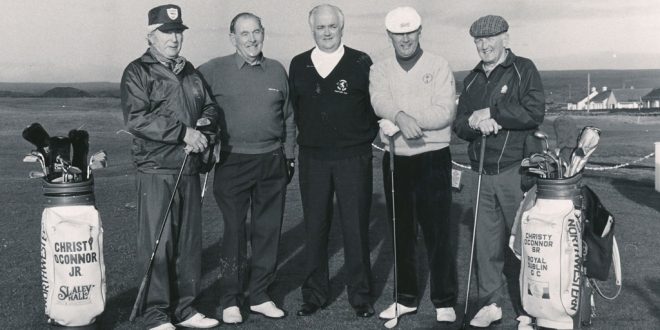 The West of Ireland native had a long association with Lahinch, where he won the Irish Professionals Championship in 1961. On that occasion he returned rounds of 67, 68, 74 and 71 to win by 11 shots.

The championship was played on the last day of August and the first day of September that year and Michael Walsh, a long-time steward at Lahinch and winner of the Munster boys title in 1955, caddied for O’Connor.

Christy Senior was a great friend of the legendary Lahinch golfer, the late John Burke and also of long-time Lahinch secretary, the late Brud Slattery. Over the years, he made many visits to the club and regularly played with the former club professional, Robert McCavery.

President Michael D Higgins sent his sympathies to the family of the golfing great following his death at the weekend.

In a statement he said, “Christy opened up the ground for many talented golfers and opened the world of golf to countless people in Ireland and abroad. As a gifted sportsman and a wonderful human being, he was characterised by his commitment to his sport and to his community in the West of Ireland
.
“His death follows that, earlier this year, of another iconic figure in golf, his nephew Christy O’Connor Junior.

Both men were very proud of their West of Ireland connections and both gave support and sponsorship to many great voluntary organisations. Christy Senior will be sorely missed by his sporting colleagues, his community and, in particular, by his very wide range of family and friends.

“Those of us fortunate enough to have met him will never forget this outstanding man and his great character of humour and compassion. Ar dheis Dé go raibh a anam dílis.”

Previous Minister Breen is willing to meet Roche in Basel
Next Biden to visit via Shannon?