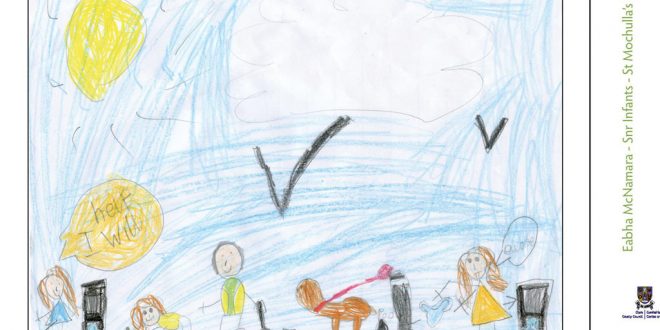 Children’s postcards from the Fleadh

THE protection of the environment is the theme of postcards designed by young people from across the county, which have been distributed throughout Ennis to coincide with Fleadh Cheoil na hÉireann.

The Green Fleadh Postcard Competition for primary schools sought designs on the themes of litter and waste recycling, energy, water and travel.

The postcards featuring the successful puplis’ name, class and school are being made available at a number of locations, including the Fleadh Office Headquarters at Áras Contae an Chláir, the Fleadh Office in the Market, Ennis Tourist Office, Ennis Chamber of Commerce on O’Connell Street and the Visit Clare Office in Abbey Street Carpark.

“The Green Fleadh team has implemented measures to keep Clare clean and to minimise the environmental impact of the Fleadh,” said Karen Foley, the council’s environmental awareness officer.

Ms. Foley continued, “The visibility of the various Green Fleadh initiatives throughout Ennis over the coming days is key to encouraging the estimated 400,000 visitors to the town to look after the local environment, and to use the waste and recycling facilities as much as possible.”

“The Green Fleadh is following the Green Your Festival Initiative which has already seen many events and destinations throughout the country being greened in partnership with participating local authorities in Ireland’s Local Authority Prevention Network,” she added.