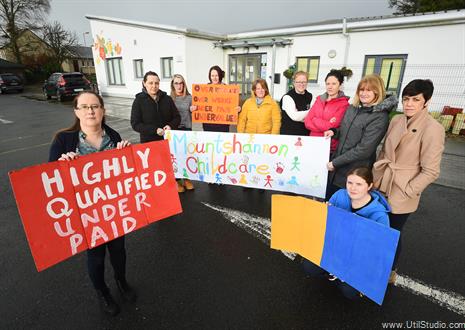 Anne Marie Walsh, Lisa Bogenberger, Chloe Cosgrove, Catriona O Shaughnessy, Noreen Murray, Grainne Keating, Clare Hayes, Geraldine Cosgrove, Darina Fahy and Anne Marie Fitzgerald, parents and staff of Mountshannon Childcare Centre who are going to Dublin on February 5th for a national demonstration to protest against what they see as a chronic neglect of the early childcare years by the government. Missing from Photo are Chloe Pearl and Cathy Hogan. Photograph by John Kelly

MORE than 50 families in East Clare will be making alternative childcare arrangements next Wednesday, as staff of Mountshannon Childcare Centre join a protest march in Dublin demanding support for a service that staff say is “at breaking point”.

The community-run facility employs 11 staff and caters for up to 70 children from a wide hinterland from Flagmount to Bodyke and as far east as Coos in County Galway. Parents and staff are appealing to Clare General Election candidates to listen to their concerns, and the centre itself has been canvassed by a number of Dáil hopefuls including Deputy Timmy Dooley and Michael McNamara. Like thousands of childcare providers nationally, the centre has joined the Early Years Alliance pre-election campaign. As part of that, it will shut its doors on February 5 to highlight a crisis created by low wages, a lack of staff, increasing costs and a challenging regulatory regime.

Staff at the centre told The Champion of their reluctance to take the radical decision of closing for a day, but say they have the full support of the families they cater for. Last month, the centre faced the prospect of closure after its insurance premium increased by 71% and that, combined with other increasing overheads, has reduced the capacity to pay staff much more than the minimum wage.

“In the run up to Christmas, we didn’t know if we would be able to open our doors come January and it was awful for staff and parents,” said Manager Annmarie Walsh. “That was a really difficult time.”

While the centre managed to draw on meagre savings to pay its insurance costs, the situation means the financial future is far from easy, particularly when it comes to covering staff wages.

“By the time we pay all of our bills, we can just about afford to pay our staff,” explained Annmarie. “We pay them well here by comparison with other places, but it’s still very, very low. It’s under the average wage of €12.30 an hour.”

Chairperson of Mountshannon Community Council, Joanne Dunphy Allen said the lack of funding from government for wages and salaries is a major challenge: “We want staff to be properly recognised and to receive the proper wages they deserve. The workloads that they carry are huge and they’re doing one of the most important jobs anybody could do.”

With no core funding from government to cover wages, Annmarie finds herself dealing with the knock-on impact a skills shortage “It’s very, very difficult to get staff. I’m lucky to get two people to come for an interview. People aren’t interested in going into childcare any more because of the waves and I know a lot of people that are leaving to work in supermarkets because there is better pay.”

Issues with administration and repeated inspections are also placing a burden, according to Joanne: “We have had a lot of different issues to deal with and because we’re volunteers, there’s a learning curve.”

The centre was founded by Mountshannon Community Council, under the direction of local woman Veronica Bleach. It is now an integral part of life for families and for the wider community. Gráinne Keating from Coos relies on the childcare service for its crèche and after-school services. “We started here when my oldest daughter was just 10 months in January 2013 and we’ve been ‘lifers’ since then. I wouldn’t be able to keep working if I didn’t have somewhere like this where my kids are safe and happy and it’s a home away from home.”

As a busy vet, Gráinne faces 80-hour working weeks once Spring comes and said any curtailing of the childcare service would have a huge impact: “If I had to close my doors, not only are there four workers hit, but what about all of the farmers who need vets?”

Next Wednesday will require some juggling in terms of alternative childcare, but Gráinne is understanding of the situation the sector faces and the purpose of the protest: “It’s for the greater good. It’s all very well to pay lip service and to say that we want women in the workforce and families to be supported, but in reality there’s very little. I would like to see that change.”

Darina Fahy, from Whitegate, is a secondary school teacher and her family has had three children access Mountshannon Childcare, including her daughter Róise who still attends. Diagnosed with Type One diabetes last year, Róise has benefited hugely from the support of the childcare staff, one of whom undertook extra training in the area. “It’s a lifelong condition and very, very complicated at her age,” said Darina. “The staff have engaged fantastically. It’s a lifeline for us.”

As members of the Early Years Alliance, Mountshannon Childcare Centre staff and management have signed up to a charter calling on government to develop a funding model that supports affordable and accessible childcare for parents, high quality for children and sustainability for providers. During the General Election campaign to-date, the centre has been canvassed by both sitting TD Timmy Dooley and candidate Michael McNamara, who, according to Annmarie have given a listening ear. However, for everyone involved in the centre, there is a clear demand for action.

“Anybody who works in this service or who avails of this service can see that it is one of the hardest jobs,” said Darina. “I couldn’t function as a teacher in my school if my children weren’t being cared for. And so I don’t think our country could could continue to work the way it does, but I don’t see that the government have really seen this. They need to look at this service.”

Fiona McGarry joined The Clare Champion as a reporter after a four-year stint as producer of Morning Focus on Clare FM. Prior to that she worked for various radio, print and online titles, including Newstalk, Maximum Media and The Tuam Herald. Fiona’s media career began in her native Mayo when she joined Midwest Radio. She is the maker of a number of radio documentaries, funded by the Broadcasting Authority of Ireland (BAI). She has also availed of the Simon Cumbers Media Fund to report on development issues supported by Irish Aid in Haiti. She won a Justice Media Award for a short radio series on the work of Bedford Row Project, which supports prisoners and families in the Mid-West. Fiona also teaches on the Journalism programmes at NUI Galway. If you have a story and would like to get in touch with Fiona you can email her at fmcgarry@clarechampion.ie or telephone 065 6864146.
Previous Finding humour as Alzheimer’s moves in
Next Kelly Stars as Clare Continue Winning Run in Wexford 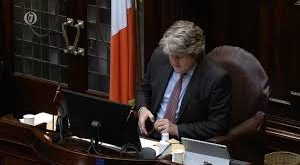