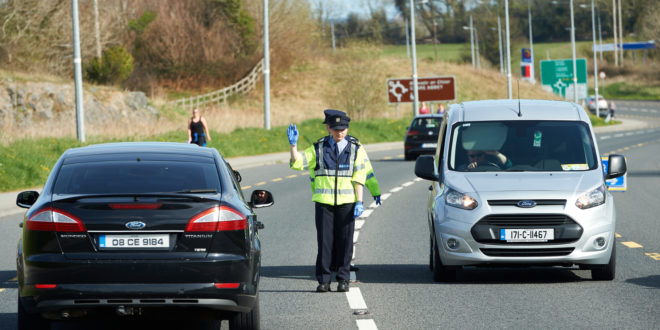 CLARE’S Garda Chief Superintendent has acknowledged the frustration some people may experience as a result of check points set up as part of Operation Fanacht.

The policing operation re-commenced on midnight October 6 when the country moved to Level 3 Covid-19 restrictions. Addressing the meeting of Clare’s Joint Policing Committee (JPC) last Monday, Chief Superintendent Seán Colleran noted that complacency had begun to set in in terms of following public health guidelines and that part of Operation Fanacht involved making people more aware of the restrictions currently in place.

“All of us have become somewhat complacent,” the Chief Superintendent said. “The increase in the Covid-19 figures show this. We are making people more aware of the guidelines.”

Currently, three static checkpoints are in place and members of the forces are engaging with the public on the M18 on the Limerick county boundary, as well as in Killaloe and Ennis. Staggered mobile checkpoints are also in use, the Chief Superintendent explained. “Some people will be frustrated by what they see,” he acknowledged.

“We are operating on the principals of the four Es – Engage, Encourage, Educate and Enforce,” the Chief Superintendent added. “Enforcement is a last resort. We take our authority from the people. We are not looking to discommode people, but this is the situation we’re in for the next couple of weeks.

Noting that when the JPC last met in February, nobody could have predicted the course of the pandemic, he said he hoped that by February of next year the environment would be different.

Responding, Councillor Gabriel Keating said he was pleased that Operation Fanacht had rolled out once again. “It is an extra burden on the force,” he said. “Congratulations and well done on your work. Let’s hope we all get out of this.”

Under Level 3, people are being encouraged not to travel out of their county unless for essential reasons.

Nationally, there are 132 large-scale checkpoints a day on main arterial routes around the country in addition to thousands of mobile checkpoints on secondary routes in towns and villages a week.

Operation Fanacht is one of a number of responses from An Garda Síochána to the pandemic. Operation Faoiseamh has been set up to respond to those experiencing domestic abuse, while Operation Navigation focuses on compliance of licensed premises with the Covid-19 restrictions.

The Gardaí have also ramped up their community response to the pandemic since the introduction of Level 3 restrictions. “If anyone is vulnerable, at this time, or who knows somebody who is, we will certainly be able to guide you in the right direction,” Chief Superintendent Colleran said.

Fiona McGarry joined The Clare Champion as a reporter after a four-year stint as producer of Morning Focus on Clare FM. Prior to that she worked for various radio, print and online titles, including Newstalk, Maximum Media and The Tuam Herald. Fiona’s media career began in her native Mayo when she joined Midwest Radio. She is the maker of a number of radio documentaries, funded by the Broadcasting Authority of Ireland (BAI). She has also availed of the Simon Cumbers Media Fund to report on development issues supported by Irish Aid in Haiti. She won a Justice Media Award for a short radio series on the work of Bedford Row Project, which supports prisoners and families in the Mid-West. Fiona also teaches on the Journalism programmes at NUI Galway. If you have a story and would like to get in touch with Fiona you can email her at fmcgarry@clarechampion.ie or telephone 065 6864146.
Previous Aer Lingus plan to restore Shannon services
Next Garda appeal after man found with head injuries