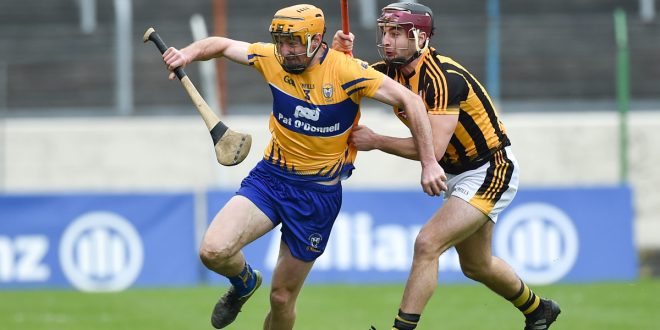 Cian Dillon of Clare in action against Kevin Kelly of Kilkenny during their national League semi-final game in Thurles. Photograph by John Kelly.

As expected, injury has ruled full back David McInerney out of the team while both Oisin O’Brien and Aron Shanagher have been omitted from the side which started against Cork. In fact Shanagher has failed to find a place in the match day twenty six.

Crusheen’s Cian Dillon returns to the starting line up and he has been named at corner back with team captain Pat O’Connor taking over at full back in place of the injured McInerney. Seadna Morey reverts from wing to corner back in place of Oisin O’Brien and Jamie Shanahan is named at wing back.

The other change sees Aaron Cunningham from Wolfe Tones named at full forward in place of his clubmate Aron Shanagher.

Into the substitutes list come Jack Browne, Shane Golden and Ian Galvin and the three that make way are McInerney (injured),Shanagher and Niall Deasy.

Meanwhile the minor team has also been named and there are also three changes in personnell. Cathal Darcy returns from injury while Killian McDermott and Gearoid Cahill will also start this week. Making way are Lee Brack, Eoin Fitzgerald and Conor Tierney.