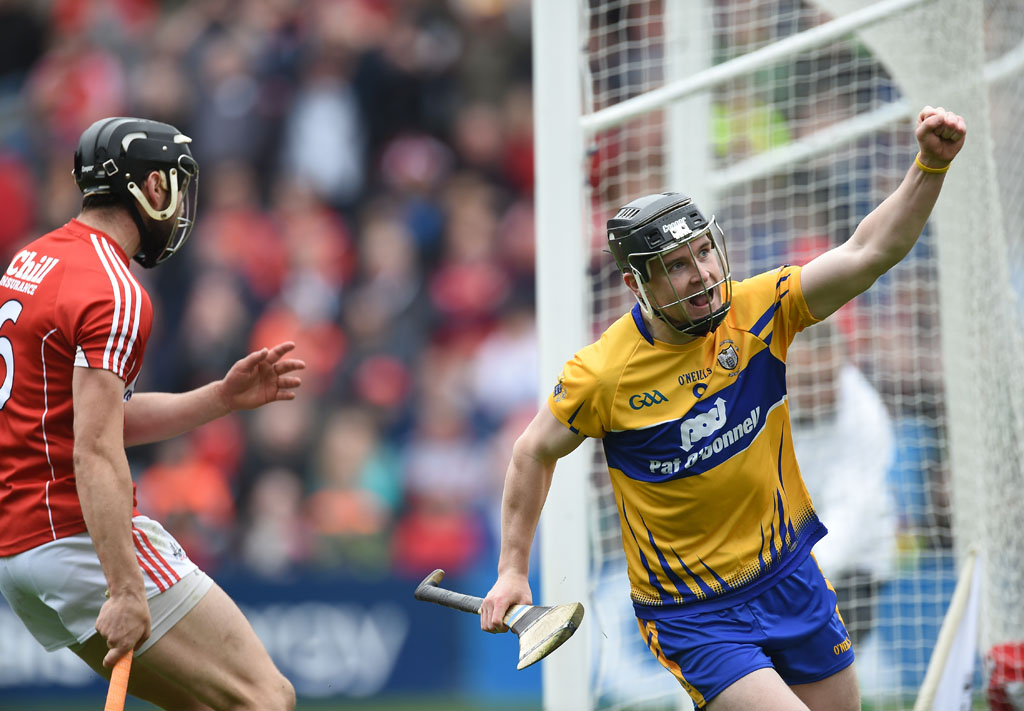 Tony Kelly of Clare celebrates a late goal against Cork during their Munster Senior game at Pairc Ui Chaoimh. Photograph by John Kelly.

Changes likely in Clare side to face Waterford

While Clare’s starting team for what is now a crucial championship tie against Waterford on Sunday (3.30pm throw-in) will not be named before Friday evening, it’s likely to feature one or two changes.

Although not introduced until the end of normal time last Sunday in Cork, Jamie Shanahan is believed to be strongly in contention for a place in the first 15 this week.

Sections of the defence struggled in Páirc Uí Chaoimh and Seadna Morey, David Fitzgerald, who recovered from an injury in the warm-up to take his place at the start and team captain, Pat O’Connor, may be under pressure to retain their first team places for this week.

Positional changes are also quite likely. These could see David Reidy switching to midfield, with Tony Kelly going to the half-forward line and Conor McGrath or Shane O’Donnell going to full-forward. Niall Deasy is likely to be in contention for a place in the line-up, while Podge Collins is another who may well come into the reckoning for a start this week.

The importance of this fixture cannot be over-stressed, as another defeat will leave the team in a very precarious position with regard to qualification for the play-off stage of the competition.

While the defeat in Cork has hurt, the belief is that it’s advantage Clare, as they have had a game at championship pace where as Waterford come to Ennis on Sunday without the benefit of an outing, with their first round bye. After a disappointing league campaign, there must be some doubt in the Déise camp as to where the team is at in terms of preparation.

Beaten All-Ireland finalists last year, their loss to Galway in September certainly hurt and few pundits give them a chance of getting back to challenge for the MacCarthy Cup this year.

Team manager Derek McGrath was in Cork last Sunday and will, no doubt, have taken special note of Clare’s play.

Converting opportunities into scores was an issue for Clare last week and they cannot afford a repetition of this on Sunday. Clare will need to be disciplined, as Padraic Mahoney has shown that he is one of the best free-takers in the game.

The counties have met in the championship on 30 occasions, with Clare winning 15 times to Waterford’s 11, with four draws. Waterford won the most recent meeting, which was back in 2016.

There is also an expectation that there will be a change or two in the personnel of the Clare minor team for their clash with Waterford (1.30pm).

The situation for both sides is similar to the senior competition, with Clare having a game under their belts. While they lost to Cork last week, Waterford will be making their first appearance in the competition on Sunday.

Conor Hegarty, Jack Minogue and Conor Carigg are among those pressing for a call-up, when Clare will again be looking to talented forwards Mark Rodgers, Kealan Guyler and dual player Shane Meehan to get through for the vital scores.

Clare will need to improve in a few key areas around the middle of the pitch and in the half-back line if they are to get a win under their belts.

There is much discussion this week as to the likely attendance at Cusack Park, with reports suggestting ticket sales are below what was predicted earlier in the season.

There was a disappointing Clare following in Cork last week and while it’s fair to say the number of Banner followers will increase on Sunday, the word from Waterford is that their fans will not be travelling in the usual big numbers.

Unlike the other five counties in the competition, Waterford are playing all of their four games away from home, as Walsh Park currently does not have the capacity required for such games.