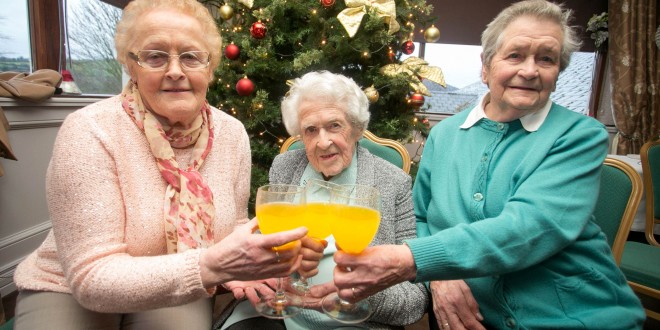 A Scariff centenarian has attributed her longevity to enjoying life and avoiding stress as much as possible.

Still enjoying very good health, Nellie, who was born in New York on November 13, 1915, reads the newspaper every day and duly informs her son, Andrew and daughter-in-law, Geraldine, about all the main news at local and national level.

According to Geraldine, Nellie’s advice for a long life is “not to worry too much, enjoy life and avoid stress”.

Apart from a reduction in her hearing, Nellie has only been hospitalised twice – last April she fell and broke her hip when she was out weeding in the garden and she previously had a minor operation.

Geraldine says her mother-in-law can still remember her boat journey from New York to Clare as if it only happened last week.

She left New York at the age of seven with her brother, Tom, who was four years at the time and moved to Lackroe, Feakle. A few months later, her parents bought a farm in Bodyke. Twelve months after her return from New York, she attended Coolenbridge National School, between Scariff and Feakle for one year, before completing her primary education in Bodyke National School.

Like most people at the time, she did not have the benefit of secondary education and stayed at home to look after her parents due to the lack of employment.

At the age of 20, she started doing catering work in O’Looney’s Bar and Restaurant in Lahinch for three or four months during the summer and she continued that for more than 10 years. She also spent one summer in Tramore working in a hotel.

In addition to rearing her three children, she also looked after Timmy’s mother and father, Andy and Margaret Rodgers, in their later years.

Nellie gets up every morning at 9.30am and she enjoys tracing her own relatives and other families back through the generations. Fair City is her favourite television programme, which she thoroughly enjoys with the aid of subtitles.

Once a fortnight, she attends Raheen Day Centre and recently attended a Christmas party in the Lakeside Hotel, Ballina, Killaloe.