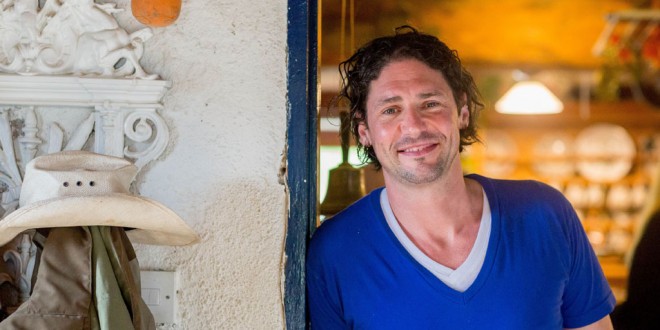 Dublin-born chef and restaurateur Colin Fassridge during filming for his new series, My Ireland with Colin.

Celebrity chef showcases Clare down under

Images of Ireland, including the west coast of Clare, have been beamed into the homes of more than one million Australians – in a brand new cookery series fronted by Dublin-born chef and restaurateur Colin Fassnidge.

My Ireland with Colin is a new two-part cookery series which sees Fassnidge return home to discover the changing face of food in Ireland.

Channel 7 in Australia – working with Tourism Ireland in Sydney – produced the new series which has aired to an audience of more than one million viewers. In the show, viewers see Colin learns to surf off the west coast of Clare!

Fassnidge, who has become a celebrity chef in his adopted Australia, runs two successful restaurants in Sydney and is a guest judge on a popular cooking game show called My Kitchen Rules, which airs in Australia (also on Channel 7).

Last autumn, he rode a Ducati 1200 around Ireland, followed closely by his film crew capturing footage for My Ireland with Colin – seeking out some of our culinary delights, local produce and hidden gems.

Diane Butler, Tourism Ireland’s manager for Australia and New Zealand, said: “We were delighted to work with Channel 7, to bring Colin Fassnidge and his crew to Co Clare and Ireland to film this brand new TV series. It’s a fantastic opportunity to get positive exposure in Australia, showcasing Irish food at its best.

“Ireland is becoming increasingly well-known for its food offering, with a reputation for high quality, natural produce used in both traditional and innovative dishes. My Ireland with Colin is also showcasing our spectacular scenery to more than one million people, helping to inspire ‘foodies’ and prospective holidaymakers to come and discover the culinary delights of Ireland for themselves.”