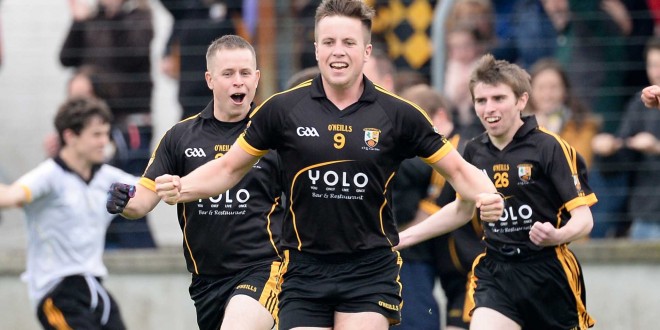 The Coolmeen lads celebrate victory on the final whistle following the Junior A championship final against Clondegad at Cooraclare. Photograph by John Kelly.

Bonfires blazed across the parishes of Shannon and Coolmeen-Cranny on Saturday evening after Wolfe Tones and Coolmeen were crowned intermediate hurling and junior A football champions repectively.

Goals proved decisive and Wolfe Tones won back senior status after a year in the lower division when they defeated Broadford at O’Garney Park in Sixmilebridge. Two goals in each half proved too much for Broadford who, despite scoring seventeen points, were five adrift when the final whistle sounded.

The winners got off to a dream start with a Kevin McCafferty goal as early as the fourth minute. Broadford rallied and drew level by the thirteenth minute and they will be disappointed that they weren’t ahead at this point but poor shooting proved costly.

Ahead by a point after twenty minutes the winners struck again and Jack Cunningham found the net, a score that helped them to a half time lead on the score of 2-4 to 0-7.

The winners made the better start to the second half and with just six minutes played they had extended their lead to seven points after Aaron Shanagher had struck for their third goal.

Broadford came storming back and four points in a row, two from substitute Donie Whelan, saw them cut the winners lead to three with ten minutes remaining.  After Padraig Hickey converted two ’65’s they had it down to one with three minutes to play but Tones held firm and a goal from substitute Dean Devanney a minute from the end of normal time sealed victory and promotion back to the top division.

Meanwhile Coolmeen’s junior footballers bounced back from the disappointment of losing last year final to capture the 2015 title when they had a one point win, 1-11 to 2-7, victory over Clondegad in the final at Cooraclare. Behind early on by two points, 0-2 to 1-1, they fought back and when they half time whistle sounded they were 1-6 to 1-3 in front but down to fourteen men.

They went on to extend their lead in the second half but as the game wore on the pressure of playing with a man less began to tell and Clondegad came storming back. When Cathal O’Connor picked up a second yellow card with time almost up, it put additional pressure on but the Martin Daly managed outfit held firm and when the final whistle sounded after five minutes of ‘injury time’, they were ahead by the minimum margin

Wolfe Tones face the champions in hurling and football