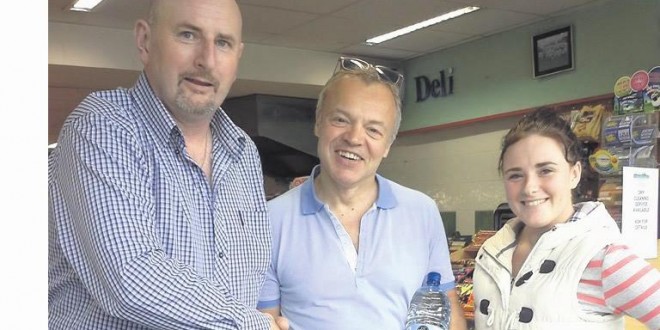 Ger O'Halloran and his niece,, Meghan, with Graham Norton

QUIN was where all the celebrities seemed to be hanging out in the last week, as locals got to meet with Bono and his wife, Ali Hewson and BBC chat show host, Graham Norton.
Graham Norton clearly enjoyed the fun side of being in the village, tweeting that he was #lost and #hungover in Ireland, while posting pictures of a statue of a monk at Quin Abbey stating “Oh Brother where art thou? Any ideas? I’d really like to know”.
He also included a second picture, one of a headstone which had Rice written on it, to which he commented, “It never stood a chance, [sic Long] live the potato”.
Speaking about meeting the well-known television host, Ger O’Halloran, who runs Abbey Stores in Quin, said Graham came into the shop for a bottle of water.
“I had an inkling when he walked into the shop of who it might be. He comes across as being much bigger on television and that kind of caught us by surprise but as soon he started to talk, we were sure and we made certain by introducing ourselves. He seemed to be travelling on his own. Myself and my wife are big fans of the show,” he said.
Mr O’Halloran added that having seen Graham’s tweets from Quin “he obviously enjoyed his walk around the village”.
“Having lived in the village all my life, I would be very familiar with the places where he has tweeted about and local statues,” he said.
Mr O’Halloran said Graham had no difficulty having his photograph taken with him and his niece Meghan Kitson and was very patient during the encounter.
“I had a problem with my phone at the time and he said there’s no problem and take as long as it takes and he was delighted to do so. My niece Meghan Kitson was in the shop with me. She had an inkling from the day before from Instagram that he was staying in Dromoland but she didn’t expect him to walk in. Two other girls in the shop, Helen and Laura, were very disappointed as they had just finished their shift. We got a tremendous reaction since, and we have had a lot of friends requests [Facebook] since. It actually surprised me how many people came into the shop, asking us why didn’t ye text us. It was as if we were expected to keep him and hold a flash mob. He obviously has a huge following,” he said.
Earlier last week, Marian and Brian Reynolds from Quin spotted Bono and his wife Ali out walking in Quin. They stopped to talk to them and have a picture taken also, much to the delight of Marian, who is a big fan.
Mr O’Halloran said he hopes that this is the start of a celebrity trend and fully expects Elvis to turn up at the Spancilhill Fair, which takes place on Monday.

Carol Byrne is a reporter at The Clare Champion newspaper reporting on news in the East Clare area and the arts. She also covers the courts in County Clare and has received seven national awards for this coverage from the Law Society of Ireland and a National Lottery Local Ireland national media award for Best Community Story 2019. A Masters in Journalism graduate of NUI Galway, she also holds a Bachelor of Arts from the University of Limerick in Music and Media Studies, and a Higher Diploma in Irish Legal Studies. She began her career interning at The Limerick Leader and Clare FM, before taking up a full time post at The Clare Champion in 2006.
@@Carlsburn
Previous From Luton to Lissycasey
Next UK abortions down for Clare women