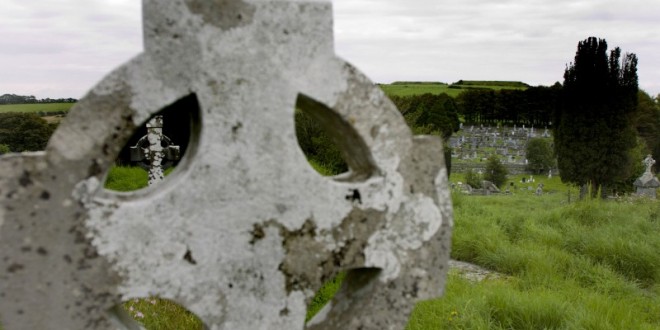 GRIEVING families are “distraught” and feel their deceased loved ones are being “forgotten about” after being buried in part of Drumcliff cemetery. While reports of items disappearing from graves in the older section of the cemetery has been condemned as “appalling and upsetting” sparking calls for CCTV cameras to be installed.
Councillor Mark Nestor, speaking at a meeting of the Ennis Municipal District, urged
works are needed to improve the layout of the burial ground and provide greater connectivity between the old and new sections.
He pointed out that there is a row of trees acting as a barrier between two sections. He outlined that people who have family members buried in Drumcliff are “in a very, very bad way and are very distraught at the layout of the graveyard.” He said, “Those who have people buried in the new section feel very much they have been forgotten about and left out. If you look at the whole row of trees separating them, unless you have a real reason to go there you wouldn’t, you wouldn’t know what’s up there.”
Bernie Haugh, acting senior executive officer, replied to the motion, “The 100 metres of mature trees provide a natural shelter belt to what has the potential to be a bleak elevated are of the site. In addition, these trees serve to mark the different approaches taken to cemetery provision in Drumcliff over the years, from the historic section B to the more recent lawn cemetery located within section E. Some tree pruning, particularly where the trees encroach on the path in section B could be carried out with a view to tidying up and improving the visual appearance of this area and this office will arrange to have this work carried out shortly.”
Acknowledging the response, Councillor Nestor said that the council needs to go a step further and take away some of the trees to allow better access between the sections. “The most important thing to have is connectivity so that nobody is forgotten about and nobody feels left out.”
Councillor Mary Howard backed the call, saying the trees are a “barrier and are putting the whole area to shade. It’s very dark and not welcoming.”
She recalled that a friend whose father had died “was so upset he had to be buried there because they couldn’t get a plot anywhere else.”
Councillor Pat Daly stressed the importance of access to gravesides. Councillor Clare Colleran Molloy said that connectivity needs to be improved and that no one should feel their family are in a “second class graveyard.”
Also at the meeting, Councillor Howard called for CCTV cameras to be installed at the graveyard following numerous reports of plants, flowers and ornaments disappearing from graves in the St Brigid’s section.
A response from Ms Haugh stated that in the past six months there have been two complaints in relation to items being removed from graves. “While I appreciate that such an incident is upsetting for family members of the deceased, the installation of CCTV in an extensive area such as Drumcliff cemetery in response to isolated incidents presents a difficulty for Clare County Council under GDPR in the justification of a CCTV scheme in terms of lawfulness and proportionality, as well as being prohibitively expensive.”
She stated the burial ground staff will continue to monitor the situation, adding, “it should also be noted that the placing of flowers and ornaments on individual graves impedes the orderly maintenance of a lawn cemetery such as St Brigid’s section E.”
Councillor Howard rejected the response, saying the council has a responsibility to take action. She outlined that a post on social media about the matter was inundated with responses from those affected. She described whoever is behind the acts as “demented and disrespectful”.
The motion was seconded by Councillor Colleran Molloy who said that the installation of CCTV needs to be reviewed. Councillor Nestor commented, “How anyone can go about that behaviour is mindboggling.” Mayor of Ennis Councillor Paul Murphy also voiced his concern and stated it is an issue that is not unique to Drumcliff.
Leonore O’Neill, senior executive officer, said that the comments of the councillors would be brought to the Rural Development Directorate for further update. She added, “We would welcome any member of the public to contact us if they have any concerns, this seems to be a bigger issue and we are always willing to listen.”