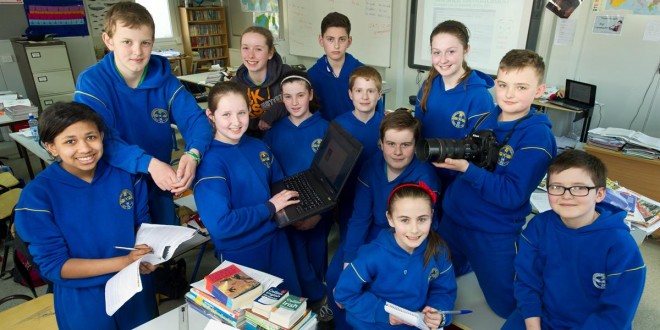 STOP the press. Ennis’ newest newspaper is preparing for its next edition, though the staff may be a little younger than expected.

Sixth class students of CBS Primary School are busy working on their Easter edition of The Scribbler, their new school newspaper. The publication is certainly proving to be popular, with the last edition selling out its 600 copy print run with a smaller reprint required.

The newspaper is just one part of the school’s ambitious e-learning plan which will see a host of technological innovations launched over the next two years.

There are 15 students involved in the paper, covering every aspect of newspaper production including journalists, typesetters, photographers, editors and press relations. Just recently the budding news hounds visited The Clare Champion where they got a first hand look at the newspaper industry.

An edition of The Scribbler is released every term, with the students charging €1 a copy and profits from the paper are put back into the business.

School principal Dara Glynn explained that the initiative has been a big hit with the students.

“This is the first year we have done this and all of the newspaper committee are involved in the production of the paper. They meet every Tuesday, and twice a week coming up to deadline. Over the course of the term, they write their own articles, but they also draw articles from the general student populous and they invite staff members to write too. In effect this is replacing the school newsletter which used to be populated with information by the principal alone,” he said.

“They certainly see this is as recognition of their ability to do things on their own. It encourages independence. They have to think about what articles go in and what kind. The students like the idea that the content is pitched at their level by children their own age. They certainly feel they have ownership of the newspaper, and I would certainly encourage them to continue on those lines. I would hope that as this moves on, that more and more children will want to contribute and that it would be one of the club’s that everyone wants to be a part of.”

“It’s been great working on The Scribbler. It’s different to the journalists and photographers. I have to know how to advertise and we run competitions to get the word out. We printed 600 copies of the Christmas edition and we needed to print another 150 which was great, the profits for each copy are put back into the newspaper, buying a computer, printer, camera and ink.

“I know a few people in shops as well so I am hoping in the future that we will be able to sell The Scribbler in shops too,” she revealed.

Khadija Bashar, (12), is one of the student journalists working on the paper. She explained that the newspaper doesn’t just cover events happening around the school. “I like writing about what is going on around the world and about politics. For the next edition, I am working on a piece about racism and bullying and on Nelson Mandela.”

Another 12 year-old, Alison Kelly is another of the paper’s journalists. She explained that as well as bringing the news to the school, the newspaper is also a good way of bringing students together.

“I’ve really been enjoying working on this. I like writing about what is going on in the school, so the other students and parents can know about what’s happening. And the best part is I get to work with my best friend.”

That friend is Laura Devitt, the newspaper’s photographer who is currently working on her next assignment. “We are running a competition to find the Easter bunny, so we are taking photographs of empty classes with a bunny hidden in it and readers have to spot it.”

Eleven year-old Conor McCarthy, one of The Scribbler’s two editors, enjoys working on the newspaper and the weekly newsroom meetings.

Mr Glynn explained that this is just one of a number of initiatives under the school’s e-learning plan.

“The plan was ratified by the board and parents back in November. We created an e-learning committee with representation from the students, parents, the board of management and staff. They came up with an incredibly ambitious two-year plan which will take this school to the very front, to be among the best in the country.

“The newspaper is one of the first innovations. The website has had a facelift, we have put a new wireless system and a new printing system in place  The next phase will be the first truly visible phase where we will be bringing in 35 laptops.

“These are all things that many schools already have, but where the school will probably set itself apart is we will be getting involved with some things that may not have been done in schools before.”

He said an example of this would be 3d printing and 3d virtual environments. The school has also had interest from a number of technology businesses wanting to get involved with the school’s future plans.

“The plan is highly ambitious and it is going to cost a lot of money. The Parents Association are on board and raised €8,000 before Christmas. They had set themselves a target of €10,000 for the year and they are going to blow that out of the water.  I’d say it will be closer to €20,000 at the rate they are going. There are fantastic innovations planned for the future at the school.”