Home » News » Cats will not shirk from the Banner Roar 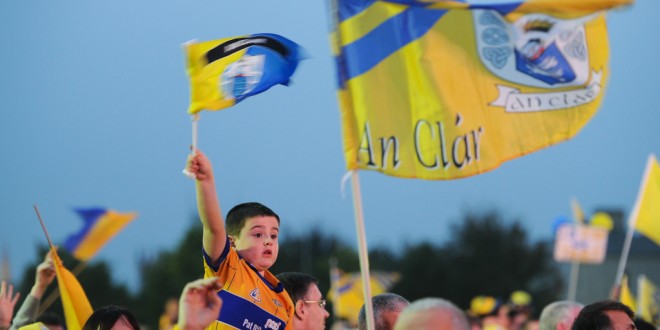 A young hurling fan welcomse back the Liam Mac Carthy Cup at the Clare U-21 and Senior All-Ireland Champion hurlers homecoming in Ennis. Photograph by John Kelly.

Cats will not shirk from the Banner Roar

THE All-Ireland champions against the National Hurling League champions. It couldn’t be a better pairing for the opening round of the 2014 league.

Throughout the past forty years, Clare and Kilkenny have provided some memorable contests in the league. Three successive final meetings in the ’70s led to capacity attendances at Semple Stadium, where Kilkenny were winners in 1976, after a replay, but Clare were crowned champions in 1977 and 1978.

In Ger Loughnane’s first year as senior manager in 1995, Clare suffered a heavy loss to the Noresiders in the league decider at Thurles, after which the Clare boss boldly predicted that his charges would win the Munster championship. Not too many outside of the camp believed him at the time, but he and Clare delivered as Munster and All-Ireland success started Clare on the road to the most successful period ever for Clare hurling during which they won three Munster and two All Ireland senior titles.

Meetings of the teams at senior level have rarely disappointed and this was evident just twelve months ago when they played a cracking game, at Cusack Park, where the visitors emerged with a rather fortunate one point win. It was generally agreed on that occasion that Clare delivered their best display of the season to date in that game which the visitors won on a scoreline of 3-10 to 1-15.

Clare were guilty of 16 wides in that game, a tie played in bitterly cold conditions. The ability of the then defending league and All-Ireland champions to score goals proved critical on the day. While disappointed with the result, it was believed experience gained would benefit the Banner side later in the season and so it proved.
Brian Hogan was a tower of strength at centre back while Lester Ryan had an excellent game at midfield from where he scored 1-1. Ritchie Hogan, in a variety of positions, Eoin Larkin and Ger Aylward until injured made big contributions for the winners.

Domhnaill O’Donovan, David McInerney until injured, and Brendan Bugler were strong in the Clare defence. Colin Ryan’s accuracy from placed balls was again vital for Clare on a day when Shane O’Donnell caused a lot of problems for the Kilkenny defence in the opening half.

Brian and Ritchie Hogan and Eoin Larkin, prominent in last year’s clash, are expected to be in the Kilkenny line up on Sunday, when Tommy Walsh, Colin Fennelly and Henry Shefflin could also feature. Eoin Murphy and David Herrity are battling it out for the number one position and it will be  interesting to see who gets the nod for this week’s opener.
The expectation is that Clare will name most of their All-Ireland winning team for this game, which is expected to test the capacity of the Ennis venue, weather permitting.

The defence struggled last week, when Brendan Bugler, Domhnaill O’Donovan and David McInerney were absentees from the starting team. Colm Galvin, Podge Collins, Conor Ryan and Shane O’Donnell were also absent last week as they had played in the pre season tournament with their college sides. The availability of these players should strengthen the Clare challenge.

Domhnaill O’Donovan has missed some Clare games recently due to work commitments, while Podge Collins has been busy with college fixtures and his involvement with the Clare footballers. It remains to be seen if either will be included in the starting line up this week.

Definitely ruled out, due to injury, are Bobby Duggan (broken thumb) and Conor Cleary, who suffered a broken finger last week.

Cathal O’Connell, Seadna Morey and Paul Flanagan are amongst those pressing strongly for starting places
Ticket sales for this game are understood to be good and the fact that TG4 are televising the match live is a further indication of the interest there is in the game.

Last week’s performance against Tipperary will have raised some eyebrows within Clare hurling and mentors and followers will be expecting some form of backlash this week.
Another close tie is expected and it may well be that Kilkenny’s freshness and the competition for places in their team will see them edge victory.