A case of Covid-19 has been identified in a person associated with Cratloe GAA Club.

The club issued a statement on their Facebook page this afternoon, which outlined that the diagnosis had been confirmed. 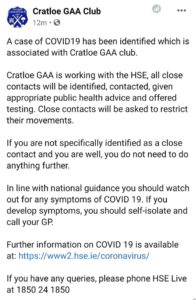 Cratloe are due to play Eire Óg in the second round of the Clare SHC on Sunday afternoon while the footballers are slated to take on Clondegad in the losers section of the Clare SFC next weekend.

No statement has yet been issued by Clare GAA on the matter but it is expected an update will be issued later this (Friday) evening.