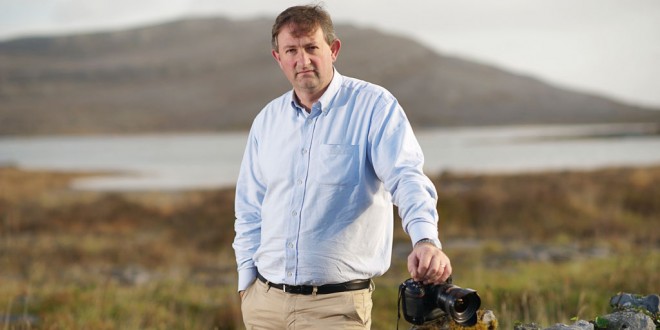 THE people of Clare are used to seeing the creative mind of photographer John Kelly jump out of them from the pages of The Clare Champion each week but for the next year, the public will also get an opportunity to view his photography in a new setting.

An award-winning photographer, John has worked with The Clare Champion for almost 25 years, displaying his passion for photography and for capturing the unusual of everyday life.

In recent weeks, John was invited by Glór in Ennis to exhibit a selection of his favourite photographs from his extensive collection at the café and lobby. Seven of his photographs are on display in the building and take over from an exhibition by Christy McNamara. Sponsored by The Clare Champion, they will showcase until September 2015.

“Glór is always looking for ways to support our local artists, photographers, musicians and we see this as an ideal space or opportunity for photographers, in particular, to showcase their work,” Patricia Callaly of Glór said.

The featured images selected by the Mullagh-born photographer showcase the randomness of his daily life as a photojournalist.

“I don’t group together sport or people, or features. The reason is, in my job as a press photographer, the jobs we go to come at random. The seven pictures here could have easily been taken on the same day. Some of them are award-winning and some are just ones I like, some are made to order whereas others are observations or pictures to go with news stories,” he outlined.

One of the interesting things about his selection is that the majority of them are in black and white, something that John is experimenting with more and more.

“I’m having a huge move back to black and white. I started out in black and white and I’m beginning to rediscover it again but I haven’t gone quite as far as shooting it on film, I’m doing it digitally. The digital stuff is a bit more clinical and you nearly have too much control but with the old analogue stuff, there was a great thrill in seeing a print emerging from the darkness under the red light,” he explained.

What he most enjoys about working with black and white is how the absence of colour can bring an image to life, such as his photograph of Caroline Sherlock and her children pressed against the glass of their cramped caravan.

“The picture was taken to portray that they are not living in the best of conditions and by it being in black and white, it captures the gloom that they are living in. I think colour would be a distraction to that picture. Black and white also brings the eye to their faces because you are not distracted by colour. While a lot of people see black and white as a picture that’s missing something, I see it as an addition. It’s a way of adding another dimension to a photograph, especially pictures that have any sort of emotion in them, particularly ones with people,” he said.

Another of his photos on display features a dog sitting on the passenger seat in an old vintage car as his owner is under the hood of the bonnet. This was a scene spotted that instantly inspired John.

“It was just an observation. We had stopped at a petrol station to get a drink for the kids and I saw it. Most of what I do is taken in the course of my work with The Clare Champion and, sometimes when I’m off, if I come across something like that, I shoot it anyway. The camera comes everywhere with me. If I left home and if I didn’t have at least a camera and a lens in the car, I would turn the car around and go back and get it because that is the day when you would see something,” he said.

Other photographs John takes in his job need to be staged to convey the message of an article. One particular staged shot that features in the exhibit was created for a significant event in Clare GAA.

“I did one with a hurley and a sliotar on fire for our All-Ireland hurling supplement, which was one of the most important preview supplements we’ve done for sport in a long, long time. I wanted it to be special and different and I wanted it to have energy to it. The whole idea of a burning sliotar, as if it’s about to land on a hurley, a bit like a comet, came to mind,” he said.

After experimenting in his studio and getting to grips with the technical aspects of the task and ensuring a safe environment, John pulled it off in one frame, without the aid of Photoshop.

Another photograph which John enjoyed taking is the PPAI award-winning shot entitled Fetch! Boy! Fetch! Taken at Cappa, Kilrush, the image features a boy jumping into the water, while a sensible dog sits on the slipway looking on.

John says a phrase that resonates with him more and more is this year’s slogan of the Press Photographers Association of Ireland (PPAI), Capturing History. He sees all his photography as capturing a frame in the history of a place or person. Some of the locations John chooses to frequent for inspiration have a special significance for him and none more so than where the Fetch! Boy! Fetch! was taken.

“Cappa, Kilrush is a place that I often find myself if I have time to spare when I’m in West Clare. The reason for that, apart from the fact that I like the place, is my mother’s grandparents were in the coastguard station there in the early 1900s. My mother’s father, my grandfather, John Rowe, was a British marine up the hill from Cappa village in the barracks. When I’m there, I feel it’s a place that my imagination can go wild and I try to imagine what life was like back then and what life was life for my grandfather, who was killed at sea in March 1941. My mother lived with her grandparents there and there is a picture at home of my mother and her brother playing just yards from where that picture was taken,” he said.

His great-grandfather, Michael Pryall, was also captured on film there in a Lawrence Collection photograph taken on the same slipway where Fetch! Boy! Fetch! was photographed. This picture won feature picture of the year at the PPAI awards in 1997 and is one of many role reversal type photographs that John seeks out.

“I like pictures that have a bit of a quirk to them, a bit of role reversal, nuns with guns, big and small, contrasts,” he said.

John’s job sees him capture a varied array of everyday life but he continues to focus on what is off-centre in life, striving to make the ordinary extraordinary.