Home » Sports » Can Clare Produce Answers To Save Hurling Season? 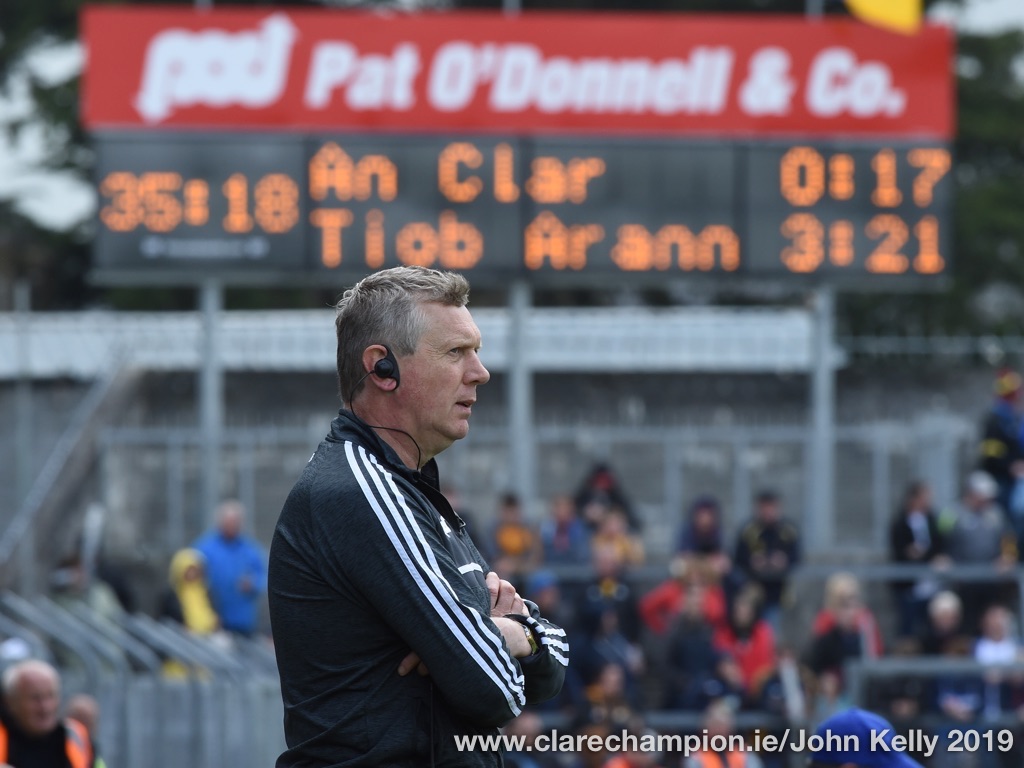 Can Clare Produce Answers To Save Hurling Season?

Sunday’s 13-point loss to Tipperary was much more significant than just being another championship defeat.

Whether people like to admit it or not, championship defeats are not a new experience for Clare hurling supporters. The pain of this defeat will subside as it always does, but when it does, it leaves a trail of questions behind it. Why did Clare allow Tipperary to win it as they pleased? Why was Tony Kelly spending spells in the full-back and full-forward line while the middle third was being torn to shreds? Why did Clare opt to employ a sweeper when chasing a game with a gale force breeze at their backs? Why could we not trouble the Tipperary goal despite having one of the most dangerous attacks in the game? How did Clare not react sooner to curb the influence of John O’Dwyer? Why did Clare continually launch possession down on top of Paudie Maher and make a hero out of him?

All those are questions everyone will no doubt have different answers for, but the reality remains that each one of them need to be answered and need to be answered fast. The beauty of the new Munster Hurling championship is that games come thick and fast leaving very little time for allowing wounds like Sunday to fester. On the other hand, the major challenge is that the short time-frame between games allows little time to tighten the bolts that have been rattled loose. It will have been a difficult week for all involved, with questions marks raised by former greats like Ger Loughnane and Anthony Daly as to where exactly this group are in relation to challenging for honours, and questions surrounding their capability to respond to Sunday’s defeat.

With great power comes great responsibility, and now that responsibility to answer all questions posed lies firmly at the feet of the squad and management. 2018 was a year to remember, and that euphoria meant that everyone came into this year’s championship in expectant mood. Clare raided Walsh Park on the opening day, and while that result cannot be dismissed, questions have to be asked as to how much can be read into it given what Waterford have suffered since. Everyone, media included, built up Cusack Park as this impregnable fortress but Tipperary showed the mercy of the Vikings as they plundered and pillaged at their ease. That is the part that stings the most. It seemed once Clare sensed the game was up, it became all about survival mode and the performance levels dropped. That is what will have disappointed even the most biased of supporter. There is no shame in going down to a superior opponent on a given day, but to not go down with the ship on your home turf is something Banner supporters did not expect to see. To hear that Tipperary chant ringing around Cusack Park as the final whistle loomed will have pushed the blade even deeper into an already septic wound.

All that being said, now is the time to respond. It just could not be set-up better.  Clare are now preparing to travel to the home of the All-Ireland champions who will be buoyant after their trouncing of Waterford. When you delve into what actually went wrong in Ennis, the hope is that most of the blots in the copybooks can be erased. Work-rate is the first and foremost requirement, and needs to be at fever-pitch from the first whistle to the last. Rushed and wayward shooting needs to be cut out, and if Clare can be that little bit more composed in the danger zones, there is no question about the deadliness of the Banner attack. A case in point would be Tony Kelly’s score early in the second period. He opted for a point even though John Conlon had stolen a yard inside the cover, and had the net been billowed at that stage, who knows what might have panned out. They are the small margins that separate victory from defeat, and Clare will need to be ruthless with every scoring opportunity if they are to come out on top. Along with the players, the management team are also under pressure on Sunday. Conor Cleary showed when introduced that he should have been on from the start and while hindsight is a great thing, it is vital lessons are learned. Clare were well beaten tactically by Tipperary and the big conundrum now becomes where do Clare get the best out of Tony Kelly? On his game, Kelly is untouchable but he needs to be involved in the play from the beginning to get into the groove. Clare need to figure out a way to get him loose around the middle third, and maybe wing-forward might be the best place to do that. It would allow him to roam the flank in search of breaks from the puck-outs and will mean Limerick will have designate someone to a man-marking role which could stifle their attacking threat from the half-back line. Clare need to try something different. They have to put Limerick on the back foot from the first second of the game and management need to react to the game that is unfolding rather than sticking with any pre-determined formula.

There is no other way to dress up Sunday’s game for Clare other than it is a season defining one. A victory will put the Banner back into pole position to qualify from the province, and effectively set-up a likely Munster semi-final against Cork in Cusack Park. A loss will leave Clare dependent on other results to see how their campaign will pan out, and scoring difference is not something that will be kind to them in the event of a three-way tie. The Cork game will still likely hold significance regardless, but victory on the Ennis Road will leave their fate in their own hands.

There has to be a response. There are too many talented hurlers and too many proud Clare men in the set-up for there not to be. They will be beaten and bruised this week and under real pressure from their own support probably for the first time since Donal Moloney and Gerry O’Connor took the reins. Sunday is the day to answer all the questions and get the train back on the tracks.