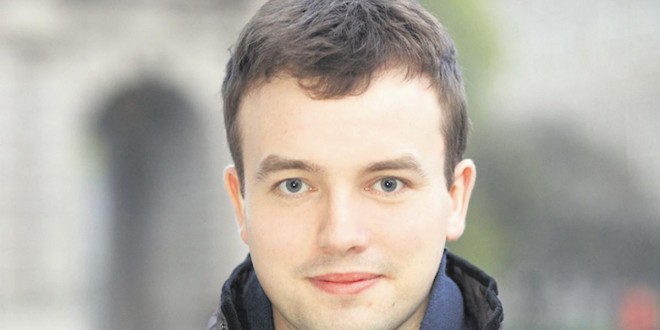 A NORTH Clare student, who found national fame when he sold his Leaving Cert notes on eBay, has been awarded a prestigious scholarship to the University of Cambridge.
Cillian Fahy was awarded a Gates Cambridge Scholarship to pursue an M. Phil. in European Literature and Culture at the university, the only Irish person to achieve this in 2014.
The Gates Cambridge Scholarships are awarded to outstanding applicants from countries outside the UK, to pursue a full-time postgraduate degree in any subject available at the University of Cambridge. They are selected based on outstanding intellectual ability; leadership potential; a commitment to improving the lives of others and a good fit between the applicant’s qualifications and aspirations and the postgraduate programme at Cambridge for which they are applying.
“The Gates Cambridge Scholarships are one of the most prestigious scholarships in the world and it is an incredible honour to receive one,” said Cillian.
“The scholarships are full-cost, covering all fees and maintenance, and so they’ve played a vital role in enabling me to even study at Cambridge,” he added.
“As an international applicant, I was competing with over 3,600 other Cambridge postgraduate applicants for only 55 places. First, you need to be ranked within the top five per cent of your course at Cambridge; then, your application is assessed by the board and those numbers are halved; and, finally you’re invited to a tough interview with experts and distinguished academics grilling you,” he outlined.
Applicants’ academic ability is based on their past and expected exam results. Cillian completed the interview back in March and will start his new course in October.
“I applied last October. The Gates Programme is the biggest scholarship programme at Cambridge so everyone who applies for postgraduate study there, applies for that too. The departments rank their applicants and, if you are in the top 5% of that intake, you are sent forward to the Gates Scholarship Trust for consideration,” he said.
“The interview was the end of a long process of getting to the next stage. When I got it, I was quite shocked because when I applied it wasn’t something I anticipated. If I didn’t get it, I would have had to get a loan. It is usually around €20,000, including maintenance. The fees themselves would be about €10,000. In second year, I got a scholarship to Trinity too. There are exams after Christmas and you have to study for them over the holidays and the new year and they are gruelling. About 80 students are selected as scholars, which means you get five years of free tuition, free accommodation and free meals. So when I was considering Cambridge, I had to weigh it up against staying here for free and pursuing a doctorate here for free. So getting the Gates Scholarship has made the decision a bit easier because, in terms of research interest, Cambridge would be much stronger in that area,” he outlined.
At the moment, Cillian is keeping his options open, in terms of his future career. “I will weigh it up. I am considering academia. That would be pretty high on the cards. But one of the things about the Gates Scholarship programme is that they are interested in getting people who are interested in social change and making a contribution to society in general. If I’m going the academic route, I would be looking at that too,” he explained.
While he may be going from Trinity to Cambridge this year, the Finnavarra man is very conscious of the support he received up to this.
“Looking back on it, Gort Community School was a great help in getting me where I am. I am so busy at the moment that I haven’t been home in ages. My family are over the moon because I won’t be looking for money off them – Masters courses are so expensive and this makes a big difference. They are a big help as well, in terms of thinking through my options and ideas. I talked it all through with them when I was at home, before I went for the interview,” he concluded.
The 21-year-old will start his new course in Cambridge in October.