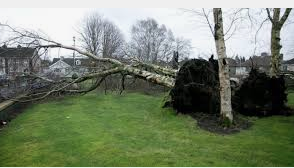 JOINED up thinking between agencies including the local authority, the ESB and Eir, as owners of the phone infrastructure network, has been called for in the wake of Storm Ellen in East Clare.

Addressing the most recent meeting of the Killaloe Municipal District, Councillor Pat Burke said the storm had had a far more serious impact on East Clare than had been forecast.

“If you were in Ennis, Quin or Tulla,” he said, “you’d hardly have noticed that there had been a storm. But, there was an awful lot of damage in areas around Scariff, Mountshannon and Whitegate.”

The Fine Gael member commended the work of council crews, the fire service and local farmers and landowners. “Local people were out helping with chain saws and tractors to open a number of roads,” he said. “We’re very grateful to them and there was a very coordinated approach taken between themselves and the council and the ESB.”

In relation to the extensive power outages in the wake of the storm, Councillor Burke said many homes locally had spent a number of days without supply.

“There were remote areas without power from the Wednesday to the Saturday,” he pointed out. “The ESB are great and we have really good relations, as councillors with them. They’re very open to receiving reports of outages from us and adding those to their list.”

Councillor Burke contrasted that situation with the confusion that had arisen in relation to outages with landlines. “When it comes to Eir, we don’t know who to contact,” he said. “We could do with more joined up thinking between all of the agencies.”

Councillor Burke also noted that there are still branches hanging on phone lines in the area and he said there was a need to keep trees cut back in the interests of safety.

Councillor Tony O’Brien agreed that council crews had gone above and beyond the call of duty. “We shouldn’t forget their hours and their efforts,” he said.

Cathaoirleach of the municipal district, Councillor Pat Hayes supported Councillor Burke’s comments noting that Eir had been contacted a number of times by the authority.

“We’ve written to Eir, at national level, three times,” he said. “The fact that they won’t engage with the council executive is a shocking indictment.”

Councillor Joe Cooney agreed that trees along roadsides needed to be cut regularly. “Given the damage, we were lucky that Storm Ellen was at its worst overnight,” he said, “and not during daylight hours when people would have been travelling on the roads.”

As Leas Cathaoirleach of Clare County Council, Councillor Burke also raised the issue at the monthly meeting of the local authority, after the impact of the storm was outlined in the September management report.

Fiona McGarry joined The Clare Champion as a reporter after a four-year stint as producer of Morning Focus on Clare FM. Prior to that she worked for various radio, print and online titles, including Newstalk, Maximum Media and The Tuam Herald. Fiona’s media career began in her native Mayo when she joined Midwest Radio. She is the maker of a number of radio documentaries, funded by the Broadcasting Authority of Ireland (BAI). She has also availed of the Simon Cumbers Media Fund to report on development issues supported by Irish Aid in Haiti. She won a Justice Media Award for a short radio series on the work of Bedford Row Project, which supports prisoners and families in the Mid-West. Fiona also teaches on the Journalism programmes at NUI Galway. If you have a story and would like to get in touch with Fiona you can email her at fmcgarry@clarechampion.ie or telephone 065 6864146.
Previous Figures show high numbers of asylum applications from Clare
Next AIMS success for Ennis Musical Society