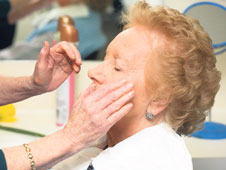 THERE’S ‘barely’ a ticket left for the Ennis Players performances of Calendar Girls, which opened on Wednesday to a packed house at Glór.

A “phenomenal” surge in ticket sales has taken place in recent days, with those involved in the charity production crediting the boost to the play’s exposure in last week’s front page of The Clare Champion, media sponsors for the project.

The brave ladies of the cast were photographed by award winning photographer John Kelly with just a few Champion’s to cover their modesty. And their daring move even hit the national airwaves.

In the run up to Wednesday’s opening night, Cormac O’Sullivan of Ennis Players said, “We’ve been averaging ticket sales 150 a day for the last four or five days, which is quite phenomenal and it was really down to, I think, the front page of The Clare Champion. It was the talk of the county and it made national radio on Friday when they were going through the regional papers and specifically picked the story out.

“The sales of tickets have been exceptional. I think we’ve sold out Wednesday, Thursday and Friday. There might be a handful of tickets left for Saturday night, but their going fast so it’s the last opportunity.”

Preparations for the stage production included a dress rehearsal earlier this week, which received a standing ovation. “We had a dress rehearsal on Monday night and we had a tour of around 30 Americans who were staying in the Old Ground attend. It was a great introduction to them of what the town has to offer and to showcase the theatre, but it was also the first time in the history of the Ennis Players got a standing ovation in a dress rehearsal. The created an enormous buzz, and as a cast and crew we can’t wait for the full houses to experience the show and give them all what they are expecting, it’s really top class.”

And in a case of life imitating art, as well as taking to the stage, the cast have also posed for their own calendar, which will be sold at each performance with money raised going to the four nominated charities.

According to Cormac, the cast and crew were more than happy to do their bit for these worthwhile causes. “The role the girls had to play in this is very, very brave but equally it shows the respect that they have for the charites they are representing.,” he said.

The Ennis Players are donating all proceeds from the production to: Cahercalla Hospice; Slainte An Chlair Cancer Centre; West Clare Cancer Care Centre and Alzheimers Day Care Centre in Ennis.