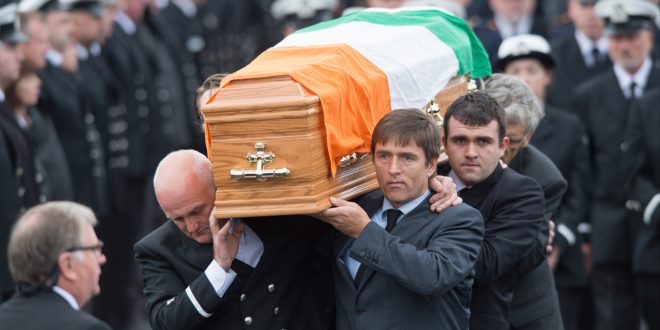 Caitriona Lucas' coffin is carried by mourners including her husband Bernard and son Ben at her funeral in Liscannor. Photograph by John Kelly.

A moving and emotional funeral mass for Caitríona Lucas heard the 41 year old mother of two described as “a gracious and wonderful woman,” by Liscannor parish priest Fr Denis Crosby.

Thousands of people paid their respects at the Irish Coast Guard volunteer’s removal on Wednesday night and Liscannor church was packed to overflowing for Thursday’s funeral mass. She died following an accident on a coast guard rescue boat in Kilkee on Monday.

President Michael D Higgns and An Taoiseach Enda Kenny were officially represented, while Transport Minister Shane Ross was amongt the congregation, which included several hundred people in the church grounds. Hundreds of Irish Coast Guard representatives were in attendance, along with representatives from all rescue services, local and national.

The national flag is today at half mast on all state buildings across the country.

Poignantly a big screen inside the church featured photos of the late Caitríona and her family. “She carried the light wonderfully into our world. It wasn’t just words and talk but actions and commitment,” Fr Crosby said.

He spoke of Caitríona’s love of animals, travel, art, books and the outdoors. Fr Crosby also referred to Caitriona’s bravery in overcoming a fear of heights as a child before committing her time as a volunteer to the Irish Coast Guard unit in Doolin. He recalled an incident in Carrigaholt where Caitróona abseiled down a cliff to rescue a stranded dog.

Caitriona’s husband, Bernard and their children, Ben and Emma were the chief mourners, along with her parents and siblings.

Ben spoke very bravely and movingly about his mother who was a librarian with Clare County Council.

“I’ll always remember your smile and your laugh. Goodbye to my wonderful mother. Love always. You are my hero,” Ben said.

The national flag was draped over Caitríona’s coffin and the Irish Coast Guard led the guard of honour. Caitríona was carried to Kilmacreehy cemetery, where she was laid to rest. 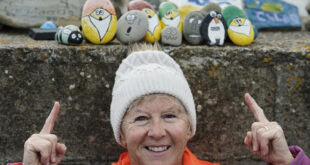