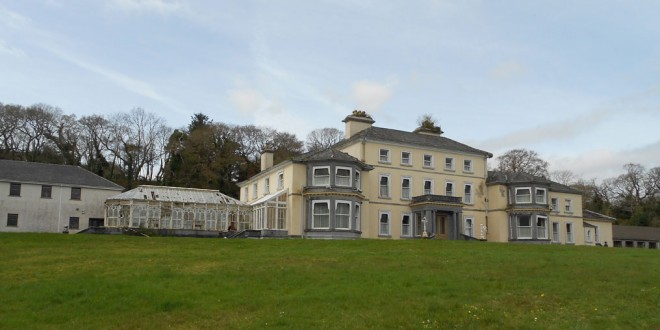 The former Salesian Convent in Cahercon is on the market

Cahercon estate for sale at €1.25m

THE former Salesian Convent in Cahercon, which operated as a secondary school until 2002, is available for sale at a price of €1.25m. The main house has been unoccupied for ten years. Joint Agents CBRE, Dublin and Costelloe Estate Agents, Ennis have brought the 302 acre property to the market on behalf of Receiver Paul McCann, Grant Thornton.

The Cahercon estate includes a five bay, three storey Georgian residence constructed in 1790. Caheracon House was the seat of The Scott family until the 1850s.
In 1920 it was purchased by the Maynooth Mission to China, who in turn sold it to the Salesians Sisters of St John Bosco in 1962. From 1962 the sisters ran a second level boarding and day school for the next 40 years.

Most of the original features from the Georgian era still exist, including the original cornicing and coving, original timber work and doors and fireplaces etc. Despite being unoccupied for the last 10 years, the house is in surprisingly good condition and features a magnificent ballroom, billiard room and light filled reception areas.

Outside, there are a number of facilities including a 10 classroom school, a sports hall and an accommodation block containing over 80 bedrooms. Boarders stayed at the school for many decades up until its amalgamation with Kildysart Vocation School in 2000.

Access to the property is via an impressive cut stone and cast iron railing entrance, with an adjoining Doric Porticoed cut limestone gate lodge, onto a long winding tarmacadam avenue, approximately 800 metres in length.

The 302 acres of land, which are mainly in one division, feature some top quality agricultural land together with extensive wooded areas.