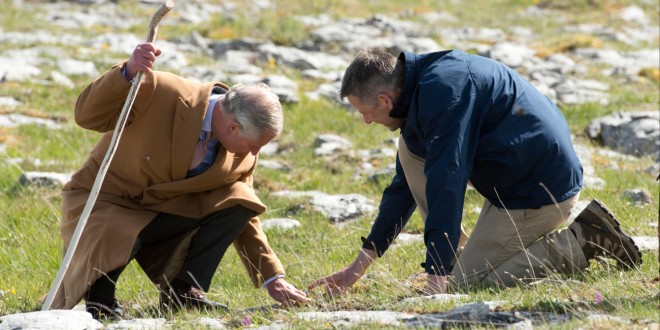 Charles Prince of Wales, is shown some Burren flora by Brendan Dunford, Project Manager Burren Beo, during his visit to the Burren in County Clare as part of his four day trip to Ireland. Photograph by John Kelly.

His Royal Highness the Prince of Wales explored the rare flowers of the Burren in the company of local farmers, schoolchildren, conservation staff and volunteers this afternoon.

During the visit, Prince Charles learned about the Burren Farming for Conservation Programme (FCP), an award-winning agri-environment programme, which is funded by the Department of Arts, Heritage and the Gaeltacht and by the Department of Agriculture, Food and the Marine. He was also introduced to the work of the Burrenbeo Trust, a local charity which co-ordinates a number of community-led education and conservation initiatives.

The Prince was welcomed by Dr Brendan Dunford, manager of the Burren FCP Programme, and introduced to some of the unique botanical, geological and archaeological features of the Burren. Prince Charles discussed the farming of the land with his host, Burren FCP farmer, Patrick Nagle, and local farm leader, Michael Davoren. Mr Nagle showed off some of the work he had completed through the Burren FCP – including the construction of stone walls and the installation of traditional gates, the repair of disused livestock watering points and the removal of invasive scrub.

The Prince was then briefed by Burren FCP scientist, Dr Sharon Parr, who explained the unique field scoring system developed by the programme, which captures the farmer’s environmental performance and rewards him/her accordingly.

Prince Charles was also introduced to National Parks and Wildlife Service conservation ranger, Emma Glanville, who works closely with Burren FCP in the planning and delivery of programme actions.