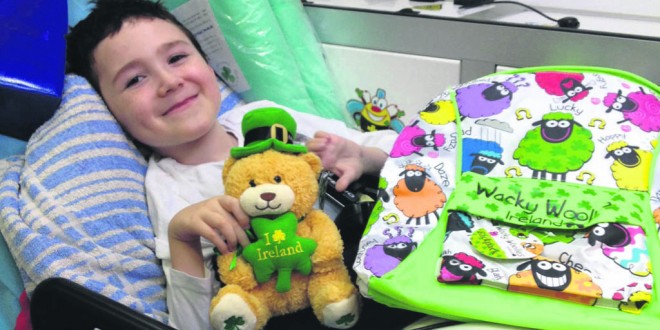 Young Jordan Perez in the BUMBLEance

BUMBLEance, with kids in mind

A Sixmilebridge boy, who has a very rare life-limiting illness has travelled in the world’s first interactive children’s ambulance, to make long journeys to hospital more comfortable.

Jordan Perez, who suffers from Spinal Muscular Atrophy (SMA) Type Two, was the first Clare child to use the BUMBLEance recently.

SMA Type Two is part of a group of disorders that affect the control of muscle movements. Confined to a wheelchair, Jordan requires full-time care on a 24-hour basis. He was honoured as one of Ireland’s nine bravest children at a Share a Dream’s National Children of Courage Awards at their Dream Ball in Clontarf Castle, Dublin last year.

BUMBLEance transports sick children from all over Ireland to their treatment centres and attempt to make like a little easier for the child and their parents. Jordan frequently makes the long and usually uncomfortable journey to Dublin for treatment.

Jordan’s mum, Sinead, described the journey as “very comfortable and much less stressful, as Jordan spent it playing with the Playstation”.

BUMBLEance is the brainchild of Tony Heffernan of the Saoirse Foundation, who was inspired by the stress his late daughter, Saoirse, experienced when she had to complete several ambulance journeys to the National Children’s Hospital in Dublin.

Every parent will appreciate that making an ambulance journey with a child can be traumatic. However, within BUMBLEance, fun is the medicine of the day, making the journey less stressful.

The Saoirse Foundation, a not-for-profit venture which receives no state funding for this service, is hopeful of ongoing support from the business community and members of the public. These donations are integral to the future of the service and its future growth.

The BUMBLEance looks like a giant bumble bee on the outside. Inside, the child’s focus is instantly diverted away from all of the necessary medical equipment and instead they will be entertained by many of the latest gadgets and gizmos on offer.

The AV equipment is all inter-connected allowing the child to operate the 19inch LED TV, DVD player, iPad, Nubi and Sony PlayStation console, with a full library of films, apps, ebooks, music and games using a single controller, from the comfort of the stretcher.