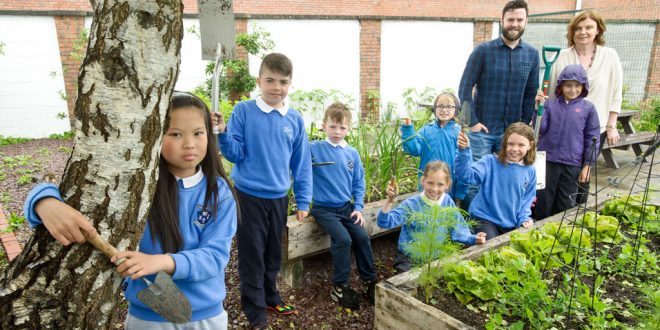 Ennis insects are living it up with five-star treatment in a “bug hotel”, thanks to the efforts of local national-school children.

Up to 200 students and 20 teachers in the Holy Family Junior School have created a hotel for insects, as part of the school’s bid for a fifth Green Flag.

Creepy crawlies have what can only be described as luxury accommodation in a timber house, made from recyclable wooden pallets, under the direction of teacher, Triona Waters. Measuring approximately six-feet high by two-feet wide, the insect house is full of leaves and old pots to provide an ideal home for a variety of bugs.

This environmentally-friendly initiative is one of the main planks of a project, which aims to teach young children, from the ages of four to eight, more about biodiversity and the wonders of nature.

Teacher, Fiona Power explains that this latest project started last September and will continue up to June 2017.

Because the children involved are so young, Ms Power says that a lot of the emphasis in the project centres on hands-on work, such as working outdoors, planting small trees and a variety of flowers, such as daffodils and tulips. She believes the biodiversity project has made a huge difference to pupils’ knowledge about nature around them.

“Last October, pupils were surveyed about what they knew about diversity and 24% had some knowledge. We carried out another survey recently and 94% could now answer the questions.

“The biodiversity project has proven to be very worthwhile for all the children. It is very hands-on and a lot of emphasis is placed on doing creative things with nature outdoors,” she said.

Environmentalist, Leif Barry gave an informative talk on biodiversity for pupils in February and May, which also helped them to learn a lot more about the topic.

In addition to a bird table, a rainwater collection tub provides water for children to feed their plants, while all their trees are named in the garden area.

The wild flower garden, which was created under the watchful eye of teacher, Marian Nolan, provides fertile ground for school projects on topics such as birds and flowers.