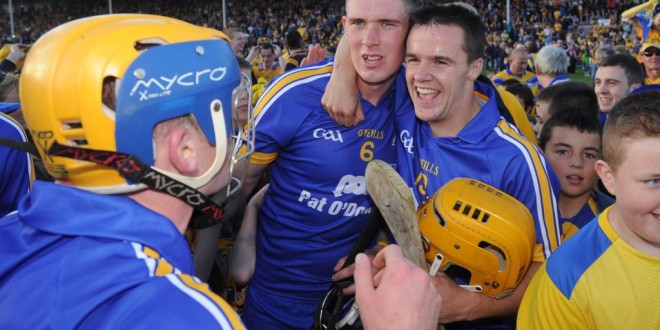 CLARE and Ballyea corner back Jack Browne, like his team-mates, was still on the Thurles sod well over an hour after the final whistle. It’s not unkind to Antrim to suggest that the Clare players were under more pressure signing autographs and posing for photographs, than they had been in the game itself. “I didn’t think there was this many people in Clare,” Jack Browne laughed, surrounded by young autograph hunters, who were trading secrets on what player was where across the fabled Tipperary sward.

“It means everything. When you’re growing up as a young lad, all you want to do is win an All-Ireland medal. It’s great,” he said of Clare’s third All-Ireland U/21 win.

Jack Browne couldn’t believe the size of the crowd roaring on Clare, given that the seniors will be back in Croke Park on September 28. “There was a massive Clare crowd. The roaring that was going on for Clare scores was great. When we came out we noticed that there was a great Clare crowd. It’s nice when you see all the lads you know from your own club, coming up and looking for autographs and that,” the rock steady corner back said.

There was no avoiding the fact that Clare completely outclassed Antrim, who did their best but were out of their depth.

Browne operated as a free man for some of the game as Antrim withdrew a forward and played an extra defender.

“It was grand. It’s great to have a free role,” he smiled.

“Either way,” he replied when asked if he prefers man marking to a free role.

It’s that type of unfussy approach that has helped Clare to successive All-Ireland U-21 titles.