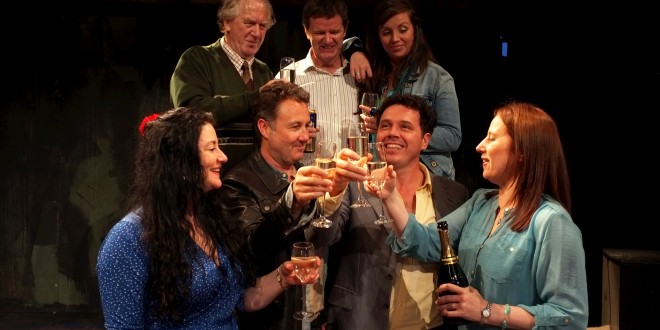 Beyond the Brooklyn Sky will be performed in Glór next week.

BEYOND The Brooklyn Sky, a play about returned emigrants and the tensions amid a group of old friends, will be performed in Glór on October 18 and 19.

The play was written by Kerry man Michael Hilliard Mulcahy and is set in his native town of Brandon. It is directed by Peter Sheridan.
A group of friends are reuniting after 20 years but their shared past is a powder keg that can easily explode. They all grew up together in Brandon, before leaving for America in the late ’80s. As sometimes happens, the land of opportunity didn’t live up to their expectations and they returned home, chastened, but wiser.

However, things happened between them in America, things of the heart and things of the purse and many of the issues were never resolved.
The reunion is because one of their group, Jack Flynn, has flown solo across the Atlantic and the stage is set for a celebration.

Peter outlined some of the background to Beyond The Brooklyn Sky.  “It’s set in 2005 or 2006 but it refers back to a time in the late ’80s, when the group of people in the play were all in America together, living in Brooklyn and Manhattan and various places. They’ve come back home now to kind of reconnect with their lives in Kerry. They all meet up for a sort of a reunion and all the s**t about their past comes out.

“There’s stuff that happened in America that needs to be resolved. Stuff has been repressed for years and never spoken about. One of the guys decides to fly solo in a small plane across the Atlantic and they’re all going to meet in Brandon in Kerry around the event.
“He achieves it, they all go down to the local hall and have a bit of a party, there’s a few drinks, some dope is smoked, there’s a big row and all hell breaks loose basically. It’s a really interesting play.”

There might be an expectation that a play about returned emigrants might be attempting to make a connection between the last recession and the current one but he says it’s not trying to do that.

“It’s very much a character-based drama. It’s about a really strong group of individuals, men and women, so there’s a lot of love, a lot of loss, a lot of alcoholism in it. There are bits about rowing the Atlantic and flying solo and mad schemes that these characters get up to, mad stuff.”

It’s the first play written by Michael Hilliard Mulcahy and Peter said he knows the people he portrays in Beyond The Brooklyn Sky.

“He’s a Brandon man. He was an actor in Dublin for many years and was always interested in the writing side of it. He began writing about five years ago and this is his first professional play to be produced but what an absolutely sensational first play to have under your belt.

“It’s been really important for him and I think it’s been a really positive experience for him to have his first play produced by Red Kettle Theatre.”
The first performance of it was in 2012.

“We did it this time last year. The world premiere was in the Dublin Theatre Festival and we got an absolutely amazing response to it, so much so that the Arts Council came in and gave us a grant to tour it around the country venues.”

That financial support is crucial nowadays and, without it, Beyond The Brooklyn Sky would hardly make it to the West of Ireland.

“It’s very difficult unless you have a grant. We look forward to touching base with all these venues and being around Clare and Kerry will be great because I think it’ll really strike a chord there,” he concluded.