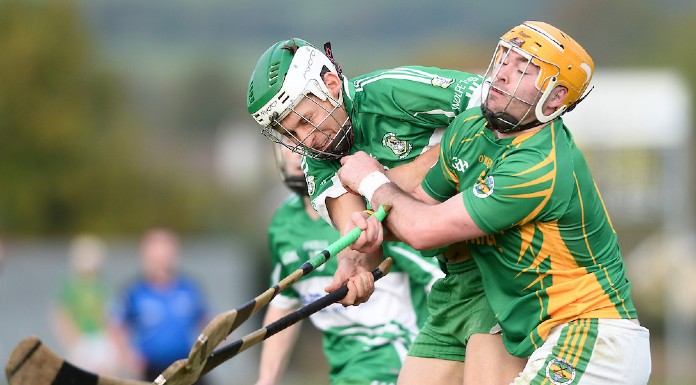 Diarmuid Moloney was the star of the show for Broadford as he landed 0-10 (0-9f) to help Broadford edge the clash and cause the upset.

The sides were evenly matched throughout the first half with free-takers Diarmuid Moloney and Micheál O’Loughlin landing most of the scores in a tit-for-tat battle. O’Loughlin started at a breakneck speed with two fine points from play in the first three minutes while Stiofán McMahon responded in kind, alongside Moloney frees. Neither team could get a grip on the game as the battle for supremacy resulted in both teams falling foul of the law regularly.

Craig and Cathal Chaplin both chipped in with scores from the half-back line for Broadford while Ian Galvin, David Fitzgerald and Conor Bourke all found scores to keep Clonlara hot on Broadford’s heels.

Perhaps the defining period of the game came just after half-time when Broadford took the game to Clonlara and rattled off four unanswered points, all frees from the stick of Moloney. Clonlara appeared rattled and the East Clare side took advantage.

Clonlara weren’t about to give up on their dream of lifting Canon Hamilton easily, though and replied with scores from O’Loughlin, Cathal O’Connell and Cian Moriarty.

With ten minutes remaining the game hung in the balance and a second Cathal O’Connell point brought Clonlara to within one point. Scores became very hard to come by and when Stiofán McMahon raced down the sideline and arrowed over in added time, it meant Clonlara would need to rattle the Broadford net to progress to the next round. The goal they so badly craved never looked like materialising and sloppy wides came back to bite the talented and youthful Clonlara side.

Broadford thoroughly deserved their victory, though, and defended well when the pressure came on.

For a full report and reaction, pick up next week’s Clare Champion.