Cathaoirleach of Clare County Council, John Crowe returned to his alma mater last week to unfurl the school’s fifth Green Flag. He was assisted in hoisting the flag by Aoibheann Kennedy and Emma O’Connor, members of the Green Schools Committee.

For a number of years now, Sixmilebridge National School has been participating in the Green Schools initiative, which encourages schools, pupils and families to learn about waste, conservation and sustainability.

Every two years or so, they explore a new theme in order to apply for the renewal of their Green Flag. The theme for this year, their fifth Green Flag, was biodiversity and, through the biodiversity theme, students learned how they can all play a big part in protecting the natural world.

Two senior members of the Green Schools Committee, Saoirse Downes and Aoibhe Ward Murphy, spoke on behalf of the committee.

Principal Gareth Heagney acknowledged the hard work, planning and organisation in receiving this Green Flag. He congratulated all the pupils, past and present, who were so committed to the principles of the Green School Programme as they try to make their locality, and the world, cleaner and greener.

He had a special mention for Ms Hazel Tuohy, co-ordinator of the programme, and the Green Schools Committee who worked so hard on the project.

Mr Heagney acknowledged the contribution of the Sixmilebridge Tidy Towns Committee and, particularly, Rita Higgins, who have always been there to support the Green School Programme. 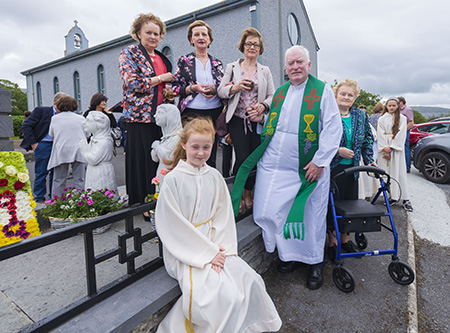