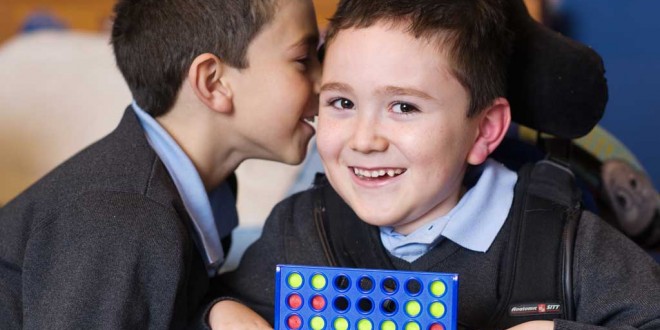 Jordan Perez,right, who suffers from Spinal Muscular Atrophy pictured at home in Sixmilebridge with his older brother Ryan. Photograph by John Kelly

A SIXMILEBRIDGE mother has launched a fundraising campaign to purchase additional nursing hours for her son, who has a life-limiting, very rare illness.

A new group, Nurses for Jordan, has organised a fundraising event in the Mill Bar, Sixmilebridge on Friday, December 13 in aid of local boy Jordan Perez (5), who suffers from Spinal Muscular Atrophy (SMA) Type Two.

This will be just the start of a series of fundraising functions, which are required to purchase more nursing hours to meet his complex medical needs.

SMA Type Two is part of a group of disorders that affect the control of muscle movements. It is caused by a loss of specialised nerve cells in the spinal cord and brainstem.

Confined to a wheelchair, Jordan requires full-time care on a 24-hour basis. He was recently honoured as one of Ireland’s nine bravest children at Share a Dream’s National Children of Courage Awards at their Dream Ball in Clontarf Castle, Dublin. The recipients were selected from many deserving nominations throughout Ireland, all of whom are facing daily battles against serious illness or disability. All of them were rewarded with a dream trip to Disneyland with their families.

While Sinead really appreciates all the support and professionalism provided by the HSE nurses, she needs more nursing hours to improve his quality of life and maintain his high standard of care.
Sinead also has to rear her eight-year-old son, Ryan and four-month-old daughter, Zoe.

Jordan first got an allocation of nursing hours after experiencing a cardiac arrest in May 2012 and spent about two months in hospital. Having completed resuscitation training, Sinead was able to revive him before he was taken to University Hospital, Limerick.

While he was being kept for 24-hour observation, he suffered another cardiac arrest.

“It was the worst moment of my life. When Jordan went blue, I thought he was gone. Thankfully, he recovered,” Sinead recalled.

“Jordan was diagnosed when he was 10 months old and doctors gave him a matter of months. But he proved them wrong. Even through all the harrowing hospital visits, all the grinding daily physio and the things his condition denies him, he loves life and is never sad,” she said.

She finds caring for Jordan two or three nights in-a-row without a break exhausting. Yet she is proud of the great spirit and resilience he has shown dealing with the serious challenges posed by his condition.

“Jordan is a very happy boy, despite his difficulties. He had a rod inserted in his back following an operation and was in a lot of pain, yet he still gave us a smile.

“He gives me great joy and we have developed a great bond together. He is a pleasure to be around and is a great kid.

“I don’t allow him to dwell on his condition and I don’t dwell on it. I could bury my head in the sand but that would be no good for him. Like anyone, I have my own moments when I get upset and cry but I don’t do it in front of him,” she said.

In addition to changing her car, she had to construct an extension at her home in Sixmilebridge to allow him to sleep in a fully equipped room downstairs, which is akin to a “mini-hospital”.

After waking in the morning around 7am, Jordan needs chest physiotherapy for about 30 minutes. He has to be dressed, toileted and fed before a special bus picks him up to take him to Sixmilebridge National School for 9am. While in school, he has to be fed, toileted, get breaks, be taken out of his wheelchair and repositioned.

When he returns home after 2pm, Sinead completes leg stretches, repositions him a few times, feeds him his dinner and snack later on, toilets him and gives him a shower before another physiotherapy session. Jordan usually goes to bed between 8pm and 9pm. He requires a ventilator to provide him with oxygen at night and a heart rate monitor, while he has to be turned throughout the night in his special bed.

He also has to adopt a particular sleeping position with equipment to keep his back in line. Every time he is turned, this has to be removed and put back into a proper position again.

He has to wear splints in his hands at night to stop his hands from contracting and stiffening up. There is no rest for Sinead or the night nurse, as Jordan needs assistance if he wants to raise his leg for a stretch, while medical equipment has to be constantly monitored.

Jordan was diagnosed with the condition in Crumlin Children’s Hospital, Dublin. Sinead said it was a huge “shock” and a massive blow at the time.

Between the age of six and nine months, she noticed signs of muscle weakness in his hands and feet and initially thought he might be lazy.

Initially, doctors thought he was Type One, which is the worst form and many toddlers can die within a year. However, further tests diagnosed him with Type Two of the condition.

Because SMA is so rare, with fewer than 100 in the country, Sinead found it difficult to get information on the best type of treatment for her son. Shortly after his diagnosis in 2009, she spent a week attending a conference for children with SMA in San Francisco, where she met the best doctors and specialists and came back with an individual care plan to suit his complex needs.

She gave up a job managing a gym and a spa in Limerick because of the increasing demands of looking after Jordan and opened up her own beauty salon in Sixmilebridge in February 2012, so she could be nearer to her home.

She is effectively his carer and has looked after his treatment on her own over the last four years.

Jordan receives nursing hours from 8am to 3pm five days a week from the HSE to facilitate his attendance at Sixmilebridge National School. He isn’t allowed to be on his own at school and has to be within sight of his nurse and special needs assistant at all times. Nurses also care for Jordan four nights a week.

A bank account has been set up in Ulster Bank, Shannon and all donations can be made to account number 35535064; sort code 986250. Tickets for the ’Bridge fundraiser will be on sale in local retail outlets.

Previous O’Neill and McInerney seek FF nomination
Next Cratloe – a football club that dabbles in hurling?