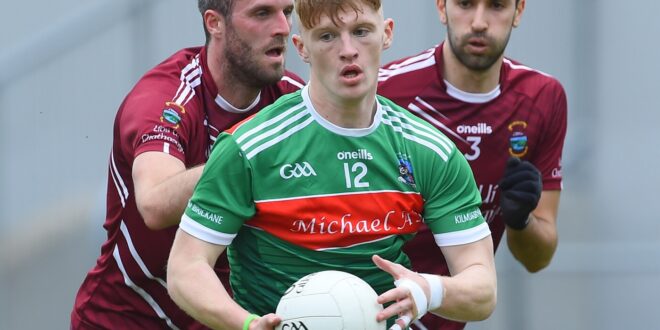 Kilmurry Ibrickane edged an entertaining encounter to seal their spot in a fourth Clare SFC final in the last five years.

The blend of youth and experience in the 2017 champions squad was evident throughout with Enda Coughlan protecting the defence while Mark Killeen’s man marking job on star man Aaron Griffin neutralised his influence for large periods.

Aidan McCarthy was in outstanding form at midfield while Shane Hickey’s raids forward from defence created overlaps for the Lissycasey defence to deal with. Dermot Coughlan and Keelan Sexton provided the attacking outlet when called upon while the form of the returning Noel Downes will be a major positive ahead of the final.

The sides were level entering the final quarter with goals from Shane and Aaron Griffin coming in response to Keelan Sexton’s for the Bricks to set up a grandstand finish.

It looked as if Kilmurry had made the vital kick for home as they reeled off 0-6 without reply inside the closing ten minutes, but a late Shane Griffin goal set up a nervy finish. Conor Finnucane’s free in injury time left just the minimum between them, but the levelling score never arrived as last year’s beaten finalists moved back into the decider.

Lissycasey almost had the perfect start to the second period but were denied what looked like a certain goal as David Sexton somehow took Shane Griffin’s effort off the line. That save proved all the more crucial just minutes later as Keelan Sexton fired home after good work from Andrew Shannon and Dermot Coughlan turned over Killian Normoyle’s kickout to create the opening. That score was followed by a trademark point on the turn from the Downes, and Kilmurry led 1-11 to 0-7 midway through the third quarter.

John Ryan’s charges had plenty chances and looked threatening before their two goal salvo came. It was the men in maroon who were in front at the opening water break by 0-5 to 0-4 but it could have been an even greater lead as Niall McCarthy’s shot just blazed over the crossbar in the last action of the quarter.

Wind conditions were tricky to contend with for both sides but there were some brilliant scores across the contest with Conor Finnucane, Dermot Coughlan and Keelan Sexton all firing impressive scores from distance. The Brick’s made the most of their purple patches and were patient in possession to create scoring opportunities. That was evident in the second quarter where four of the last five points saw Kilmurry 0-9 to 0-7 ahead at the break.

That strong start to the second half saw Kilmurry move seven points clear, but for the remainder of the third quarter, Lissycasey outscored the West Clare men 2-2 to 0-1 to restored parity at the final water break. Both sides struggled at times on their own kickouts but Kilmurry were more ruthless in transforming turnover possession into scores.

That experience of keeping the foot down saw them reel off six without reply at the start of the final quarter, with Keelan Sexton (2), Dermot Coughlan, Daniel Walsh, Daryn Callinan and Aidan McCarthy sending them 1-18 to 2-9 clear.

Griffin’s late goal set up a dramatic injury time period but Kilmurry controlled possession in the closing stages to see out the win.