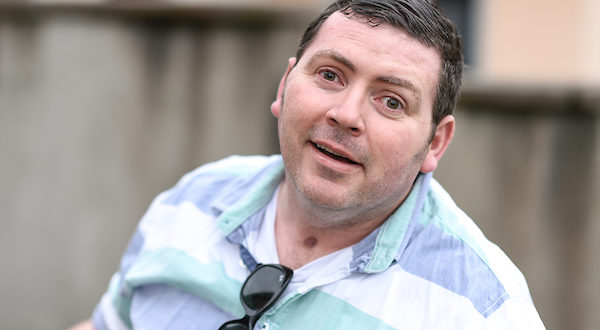 Brian Hogan at the Acquired Brain Injury Ireland premises at Creggaunnahilla, Clarecastle where he now lives. Photograph by John Kelly.

IN 2009 Brian Hogan suffered severe brain damage after an unprovoked attack left him blind and partially paralysed. However, he hasn’t let that stop him. Brian who lives in Acquired Brain Injury’s (ABI) residential service in Clarecastle has gone from needing to use a wheelchair to taking on a mammoth walkathon challenge.
Brian has vowed to walk the equivalent of 20 laps of Thomond Park, and just last weekend he surpassed his fundraising target of €10,000 for ABI, with donations still coming in. He will be taking on his final lap in style early next month, walking around the famous Thomond Park rugby pitch.
Speaking about the fundraiser, Brian explains, “My fitness levels prior to my assault in 2009 were excellent as I attended the gym four times a week. I swam, ran and cycled. I was a non-smoker and in excellent health. As a result of my Acquired Brain Injury I suffered a right-side hematoma causing left sided weakness. When I came out of my coma, I realised to my horror that I had lost my sight.
“My glass has always been half full, so cocooning has given me an opportunity rather than being a negative. I have a chance to exercise, get stronger and lose some weight. Exercise is better than any anti-depressants.”
He has been walking every day as far as he can, clocking up over 3,000 metres in three weeks which is the equivalent of eight laps of the Thomond Park pitch.
“Acquired Brain Injury Ireland are giving me back my independence, so I want to give back to them. Where there is life there is hope.”
Originally from Ballykeeffe in County Limerick, Brian was attacked on July 19, 2009 while on a night out in Nottingham where had been living and working. He hit his head off of the pavement after a single punch from a stranger, and suffered an internal bleed to the brain. A surgeon worked on Brian for five hours, and he was put into an induced coma for three months. When he woke up he discovered he had lost his sight and ability to walk, facing a long road of rehabilitation and recovery.
In 2012, Brian underwent stem cell infusion surgery in China, in the hopes that it might help him regain his sight and ability to walk. Though his family were told by doctors in Beijing that it could take six to eight months before the stem cells would take effect, they began to see some small signs of improvement a few months after his treatment. Coupled with physiotherapy, Brian’s mobility along his left side improved.
Brian’s sister Nevis Hogan tells us that since lockdown the family have been unable to spend time together, but they are keeping in regular contact. She explains the idea for the fundraiser came as Brian was focused on walking most days, beating his previous days’ milestone. “I thought why not have a goal and I asked Brian what he thought about doing a fundraiser for Acquired Brain Injury Ireland as a way of giving back as they have been his family in our absence.”
She continues, “Acquired Brain Injury have been pivotal in Brian’s rehabilitation and have helped him get back on his feet to keep him focused and active in particular during lockdown, this in itself has its challenges given his complete blindness. This is testament to the wonderful work ABI do in the community.” She expressed appreciation to all who have supported Brian and his fundraiser in Clare.
To donate to Brian’s fundraising efforts check https://www.facebook.com/donate/1393556027518288/?fundraiser_source=external_url