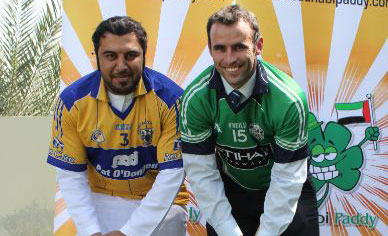 A NORTH Clare man was among the Irish diaspora who celebrated St Patrick’s Day in Abu Dhabi. The festivities started a little earlier there because the weekend is offi cially Friday and Saturday.

Corofin’s Brian Cummins was subbing in Crusheen and Cloughleigh primary schools, before he moved to Dublin and from there to Melbourne, where he met his wife. Four years ago, the pair moved to the United Arab Emirates.

“When I got the opportunity to live and teach in Abu Dhabi, I attempted to source information prior to my relocation and found scant information. Consequently, I identified a need for a free and informative website to help Irish expats coming over from Ireland,” he outlined.

Still teaching, Brian has set up another venture AbuDhabiPaddy.com, based on his own experience of trying to settle into the new culture.

“It was diffi cult here at fi rst. It is very different. Everything is Muslim. But you get accustomed to prayer times and the heat and little things like that, which would be different to home. Overall, it was a successful transition, really.”

Brian and his wife knew no one when they moved to Abu Dhabi. Having played Gaelic football for Clare and in Dublin with Erin’s Isle, he was eager to get involved with the GAA. He joined local club, Abu Dhabi Na Fianna, which has four men’s teams and fi ve
ladies’ teams – demonstrating the size of the Irish community in the city.

Indeed, his involvement in the club has meant he is now Gaelic games juvenile development offi cer for Abu Dhabi Na Fianna Óg and the Middle East County Board. He is also a voluntary member of the Abu Dhabi Irish Society.
“Through the club, I got to know other Irish people. It is a great community, with the GAA club and the Irish society, little events like the St Patrick’s Day ball, the Rose of Tralee ball, quizzes. Everything you would associate with a community at home.
Then we fl y around the gulf to Doha, drive up to Dubai or go to Oman or Bahrain to play other Irish teams in the Gulf – it is called the Middle East County Board. It is a fantastic outlet,” he said.
“I was receiving a high volume of emails from friends and family and lads I went to college with, asking what it was like to live in Abu Dhabi. I decided to set up the website AbuDhabiPaddy.com. It has just exploded in the past six months. It started out as a social venture but it has taken legs and hopefully will be acommercial venture where I offer advertising space on it.

“You would be shocked by the number of Clare people here; there is a huge Clare following. We have a soccer club, Abu Dhabi Wolf Hounds, that was set up by two Clare men, Ciaran McMahon and Stephen Daly. They are flying it here with the soccer,” he added.
Brian has simple advice for anyone moving to a new culture, particularly Abu Dhabi.
“Just be patient and give yourself a year to love it. The lifestyle is fantastic. It is obviously tax-free, as well, and it has a great standard of living for young people, for children and for married people. It is only seven hours from home as well – it has that beauty that unfortunately Australia does not, being a day away,” he said.

Brian is coming home in April but his plan is to stay in Abu Dhabi for the coming years.

“It is sad really. I have lived in and loved Clare all my life and the hurling team seems to be keeping people’s spirits up, by the looks of it, at home and abroad. There are so many young people who have to leave.

“My brother, Eamonn, lives here too, and all his friends are gone. They are all either in Canada or Australia. People just want a change because the story there is tax, tax and more tax. Obviously, the weather isn’t helping either,” he concluded.