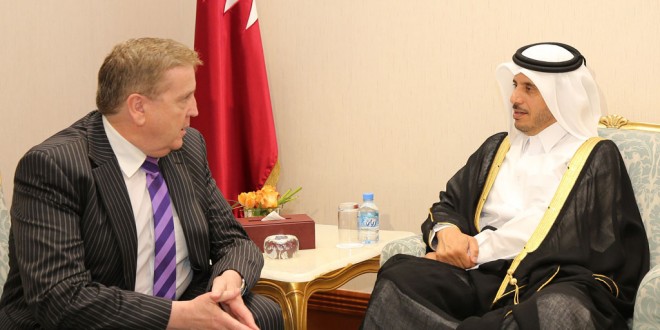 Chairman of the Oireachtas Joint Committee on Foreign Affairs, Pat Breen visited Qatar this week where he delivered a key note address to the economic conference in Doha. He is also attended a series of high level meetings with the region’s key political and business leaders.

One of his first meetings was with the Qatari prime minister and Deputy Breen noted,“The one-on-one engagement with the prime minster of Qatar was valuable opportunity to raise a number of areas of mutual interest to both our countries. PM Abdullah bin Nasser bin Khalifa Al Thani raised the opportunities for greater trade between Ireland and Qatar. He also referred to the visit of Taoiseach Enda Kenny TD to the Gulf State last year.

At a separate meeting with the Director of European Affairs at Qatar’s Foreign Ministry, I raised the possibility of resuming trade in Irish beef, and he agreed to push this issue with his veterinary officials in the coming weeks.”

Deputy Breen also met the Deputy Foreign Affairs Minister of Qatar for a discussion on the current instability in the Middle East. Ireland’s humanitarian contribution in conflict zones in the region was raised.

Deputy Breen has now travelled to Kuwait City for meetings with the Speaker of the Kuwaiti parliament and the Kuwaiti Deputy Minister for Foreign Affairs, as well as Irish business groups and members of the diaspora.