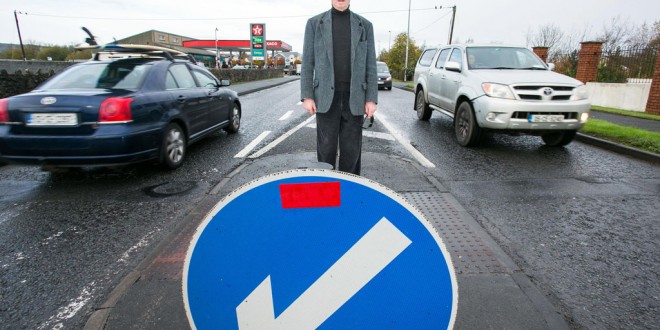 TRAFFIC calming measures at Loughville have been anything but calming for Councillor James Breen, since they were introduced three years ago.

The blue traffic island and black roadside bollards are designed to slow traffic down on the busy Ennis to Ennistymon road, but Councillor Breen has been concerned about how difficult it is for motorists to see the signs or bollards. He has brought it to the attention of the council on a number of occasions.

“They are small circular blue signs with white arrows and they are deadly at night because if cars are coming against you at the dip of the hill, you can’t see them,” he said.

“The bollards are black and are equally hard to see at night. Every time I raised it at the council, I was told it was the NRA who was responsible,” he said. “I can’t understand why the NRA hasn’t done something about it over the past three years.”

Last week, however, when he approached the traffic island, the Kilnamona councillor saw red. “Someone from the community with a bit of civic spirit has seen the danger and has come along and put red markings on the sign on the Ennis side and on the Ennistymon side and red markings on the bollards and on the footpath,” Councillor Breen said. “This makes it much easier to see but, to be honest, is a very poor reflection on the NRA to say a person out in the community sees the danger and takes it on himself or herself to see if they can save somebody’s life.

“I don’t know who did it but I’d like to compliment them. You can see it now,” he said.