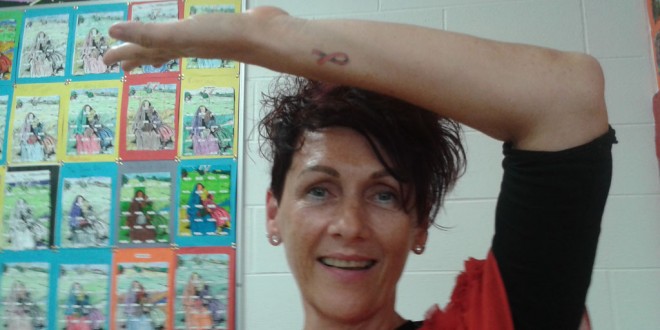 THE Ink it Pink campaign begun by Ennis teacher, Carmel Kelleher has gone from strength to strength since its launch at the start of October.

Tattooist Dave Donnellan is busy tattooing the tiny pink ribbons on supporters and has now decided to designate a full day, next Wednesday, to keep up with the demand.

Dave will also bring in another tattoo artist to help him with the bookings in his studio on Barrack Street on Wednesday.
“The publicity from The Clare Champion article was great to launch the campaign and the response has been terrific,” Carmel explained.

“Ink it Pink is a novel idea and it is generating great interest. All age groups have already tattooed and donated for a myriad of reasons,” said the Gaelscoil Mhichíl Cíosóig teacher.

Carmel, who had breast cancer in 2009, launched her campaign in response to the deaths of three of her friends this year and had her own wrist tattooed on impulse in June – the day a close friend died from cancer. She also wanted to show her support for the women and, increasingly, for the men, who are currently receiving treatment for breast cancer and for those who have survived, with her small pink ribbon tattoo.

“The reason I did it is simple. It’s the story of my life, but it’s also in honour and memory of those who died, for those who have been recently diagnosed and for the survivors, as well, of course, because it’s not always a fatalistic story.

The cost of the pink ribbon tattoo is €30, with €20 going to Clare Cancer Support in Kilnamona, whose drop-in centre Carmel found “amazing”.

“Rochfords have very kindly donated some pink ribbons and some information brochures about breast cancer and my sister, Fiona and her business partner, Rosaleen, at Monument Hair Salon, Parnell Street, are also taking donations. I will be having a Lá Bándearg or a Pink Day on Friday, October 24 at Gaelscoil Mhichíl Cíosóig, where I work. The children will wear something pink to school and will donate to Clare Cancer Support,” Carmel said

Paint it Pink for breast cancer