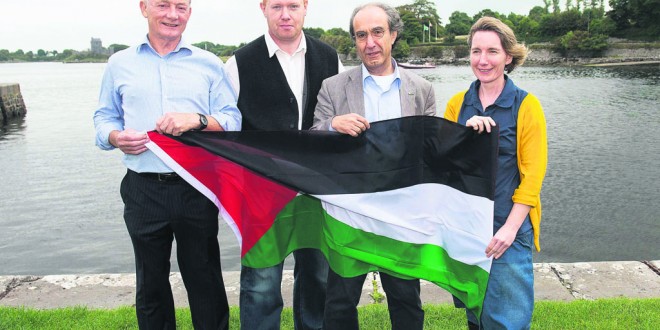 Ambassador Ahmad Abdelrazek (with from left ban organisers) John Griffin, Frank Naughton (Ambassador) and Vicky Donnelly on a visit to the little fishing village of kinvara in Co. Galway where there is a ban on Israeli goods inlace in opposition to the killing of Children in Gaza . photo:Andrew Downes

Boycott a catalyst for change

THE recent boycott of Israeli goods by Kinvara businesses has been a catalyst for change elsewhere and was a welcome show of solidarity with the people of Gaza, according to the Palestinian Ambassador to Ireland, Ahmad Abdelrazek.

His Excellency Mr Abdelrazek was in the South Galway village with his wife, Rania Abdullah, on Friday to acknowledge the collective action taken by the pharmacy, retailers, restaurants, cafés and salons there, in response to the bombardment of Gaza last month.

The boycott was the brainchild of John Griffin, Frank Naughton and Vicky Donnelly, who guided the couple around the village during their short visit, introducing them to business people and members of the community.

His Excellency Mr Abdelrazek was welcomed by those who met him and even gave an impromptu address to the busy Kinvara Farmers’ Market.

In an interview with The Clare Champion, the ambassador stated that people in the Gaza Strip and the West Bank were aware of the move by the businesses in Kinvara.

“This is very important that people know what is going on, that they know that people from a small village in Ireland are thinking about them and supporting them, that gives them hope that they are not alone,” he outlined.

Mr Abdelrazek said he was delighted to be in the village because it gave him the opportunity to see a grassroots movement and meet with those involved.

“Sometimes, in my position, I work with politicians and people who are implicated in political affairs but here in Kinvara, it was a special situation because it has no link to politics, no link to interests, because the people I met here, they have done what they have done only from their heart and their conviction that injustice should not exist,” he said.

“I think what they have done is to say that we don’t agree with the operation and the injustice that the Palestinian people are going through. That is what is great. It is spontaneous and it is not calculated and most of them, or the majority of them, do not even know Palestine, I mean they have never been there. Palestine is thousands of kilometres from here but they wanted to say we don’t accept what they are going through because it is injustice and we don’t accept injustice,” Mr Abdelrazek continued.

The ambassador found out about the boycott after reading an article in a newspaper and immediately set about organising a visit.

“It touched me because Kinvara is a small village, I mean to my knowledge, it does not have a reputation of where there are big parties or activists or things like that. It was the people themselves who took the decision, the supermarket, the pharmacy, they are people who are trying to live their lives and to work but they are aware of what is going on in the world. That is very important that you are not only living in your corner and just saying ‘I don’t care what is going on’ but the people of Kinvara proved there is still humanity, that humanity exists and there is still solidarity with other oppressed people,” he said.

His Excellency Mr Abdelrazek noted that Ireland had a history of supporting other countries, especially “when we remember the boycott of South Africa started in Ireland”.

“The boycott has had a very, very, big impact,” he said, comparing it to the Dunnes Stores workers’ boycott of South African goods in protest against apartheid in the 1980s.

“The extreme right, the extremists, they were mocking these people who were organising the boycott but now they have started to realise that it is a serious one because now it has spread more and more and especially in the United States. It is exactly what happened with the South African apartheid regime, when this lady from Dunnes Stores, everybody laughed, saying ‘what can this lady cashier do to big politics’ but in the end, the United States had to bend and follow her,” Mr Abdelrazek claimed.

The Ambassador described the situation in his home state as “very difficult” outlining Palestinian distrust of the Israeli Government and called for further official support from Ireland and other countries.

“The international community is so important and the support of the international community, to make (peace between) the Israeli Government and Palestine. There is no other solution other than a two-state solution and a peaceful resolution, not by killing people, not by destroying the houses and the hospitals but to go and to make peace,” he said.

“A few years ago it voted for the admission of Palestine as an observer state in the United Nations but we hope that now the Irish Government would recognise fully the Palestinian State as a full member of the United Nations,” Mr Abdelrazek concluded. 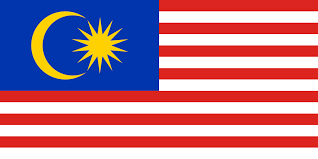