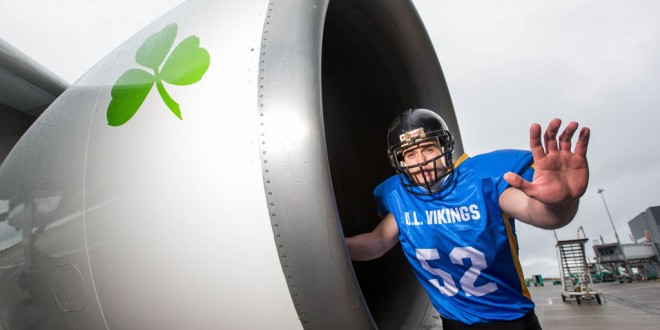 SHANNON and America’s most Irish city got a little closer on Wednesday, as Aer Lingus commenced a daily year-round service to Boston. It will also be operating a six-times-a-week New York service, starting on March 30.

The increased transatlantic services will build on the momentum achieved in the second half of last year when passenger numbers on US services at Shannon grew by 22%, compared with the same six months in 2012.

Wednesday’s flight was a first in that it marked Aer Lingus’ inaugural commercial transatlantic flight with a Boeing 757 aircraft. The airline will be basing two 757s at the Clare airport, replacing a single Airbus A330.

Speaking at the launch on Wednesday morning, Clare Deputy Pat Breen noted, “This is a major announcement for Shannon Airport. The year-round seven-times weekly services to Boston and six-times weekly to New York will bolster transatlantic capacity and provides a much-needed winter boost, something which will also be warmly welcomed by tour operators, local hotels and B&Bs in this region. The American tourist is a very much valued customer, as they spend more and stay longer.”

The Fine Gael TD lauded the performance of Shannon since its separation from the Dublin Airport Authority, just over a year ago.

“I pay tribute today to the Shannon Airport Authority, to your chairperson, CEO and your staff for your hard work in reversing years of decline. For the first time in five years, passenger figures for 2013 were up and you have broken even which is a remarkable achievement.

“The Government is committed to supporting your efforts in transforming this airport. The State Airports Bill will copper fasten development at the airport and will further enhance the Shannon Region’s reputation as a location for aviation-related business.”

Deputy Breen said there are important links between Ireland and Boston and said that efforts are continuing to regularise the status of illegal Irish emigrants in the US. “Boston is an important route, with 20% of the 4.5 million in the Greater Massachusetts area claiming some Irish ancestry. Ten thousand Irish are classified as undocumented in Boston. There is a lot happening now in Washington and there is a real push by the Irish Government to support the efforts to legalise their status. I will be travelling to Washington with the Taoiseach for St Patrick’s Day events, when we will intensify our efforts for immigration reform, which would allow Irish expats to once again travel home without fear of recrimination and would create an even greater demand for transatlantic services to Shannon.”

He also called on Aer Lingus to expand its European services. “I would like to commend Aer Lingus for your expansion plans here in Shannon and your positive response to the Government’s decision to scrap the air travel tax in the Budget. This decision was taken to encourage airlines to increase flight capacity and it is clearly delivering results. Expanding into Europe is very welcome and I acknowledge the opening of your new route to Malaga but the icing on the cake would be if you were to operate a direct service into one of Europe’s main hub airports, either in Frankfurt or Amsterdam. This would allow Shannon to copper fasten its status as the gateway to the west of Ireland.”

A lot of work went into securing service

Shannon Group CEO Neil Pakey is delighted with the start of the new service, saying a lot of effort had gone into securing it.

“It’s a short hop to Boston really, when you consider you can be there in six hours. It’s a great day and everyone worked hard to get this result,” he said.
It will have to be heavily marketed now, he added. “What we’ve got to do is fill the planes that we’ve got and that speaks for itself with the airlines. The airlines have got to make commercial successes out of the decisions that they’ve moved on, in terms of putting capacity in and we’ll be looking to do a lot of marketing now, making sure that the next year is a success. Of course, we’re talking with the airlines all the time about what happens next and what other opportunities are out there.”

Most of the business will come from Americans visiting Ireland, he said, but there will still be a significant amount of Irish people using it.
“It’ll probably be about 60% and 40%, so you still need the outbound to use it as well. So anybody who is thinking of using another airport when we’ve got all these new services, please think again.”

There are hopes that the US border and customs preclearance facility at Shannon will make the airport attractive for people travelling to the US from Britain or the Continent. Mr Pakey said he hopes that business will develop.

“Aer Lingus have timed these flights so that they will be able to do two-way connections to Manchester, Bristol and Birmingham. We’ll just see if the numbers develop, if there’s only four or five a flight at the moment, maybe that’ll grow in time and we’ll be back with the regional airline talking about increasing capacity.”

Mr Pakey was reluctant to discuss the implications of a disagreement between staff and management over pensions, which has led to a ballot for industrial action.
“It’s not one for today, everyone you see here is happy to be working together to make a success of this.”

Chair of Shannon Group, Rose Hynes, also said a lot of work had gone into securing the service.
“I’m delighted to be here because this is something we’ve wanted for quite a while. It was Thomas Edison who said that everything comes to he who hustles while he waits, well we did a lot of hustling to make this happen. Christoph (Mueller) knows we were doing another little bit of hustling this morning!” she said.

“I will be meeting the Mayor of Boston, Mayor Walsh, when I go to Boston and I will certainly be trying to promote this flight. He is very interested in developing the links and doing what he can to promote it. As you probably know, his parents came from Rosmuc and Carna and he’s really, really interested in this,” she added.

Aer Lingus chief executive, Christoph Mueller, said he is confident the new smaller 757 aircraft will help make the route sustainable.
“We do everything very demand-led and the demand over the last few years has shown there is also, in winter, sufficient demand to fill the 757; that was not the case with our large aircraft, the Airbus 330, so we are quite confident.”

Comparing the 757 with the A330, he said, “It’s a little bit more than half (the size) and that makes the difference. Normally, airlines operate in a way that they are profitable, with an 80% load factor to be profitable and that was unachievable with the 330 but will be possible with the 757”.

Asked about the possibility of adding more European services from Shannon, he said the airline is open to it.
“We will keep on experimenting, it’s in our interest to fly more routes out of Shannon and we will try whatever we can to add more aircraft to the Shannon base.”

Aer Lingus staff have been balloted regarding potential industrial action over pensions but Mr Mueller was reluctant to comment on the matter beyond saying it “is not a new issue” and that the company are “working through the process”.