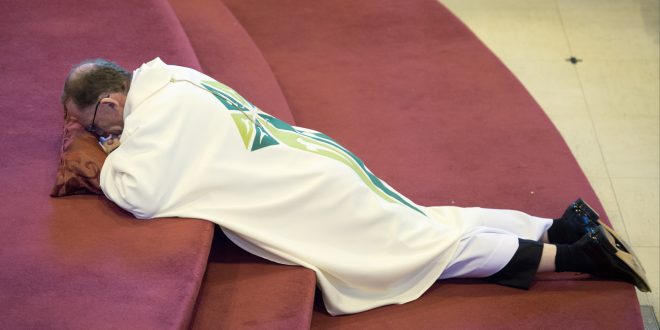 Fr Fintan Monahan lies before the altar during his Episcopal ordination as Bishop of Killaloe in Ennis Cathedral. Photograph by John Kelly.

The episcopal ordination has taken place of Fr Fintan Monahan, as Bishop of Killaloe at Ennis Cathedral this Sunday afternoon.

The newly ordained Bishop of Killaloe was joined by his parents Tom and Peg, his sister Caitriona and brother Sean, extended family, close friends and neighbours at the celebration.

The sermon was delivered by Very Reverend Brendan Canon Kilcoyne PP of Athenry, a close friend of Bishop Monahan’s for the past 20 years.

In his homily, he said “We will not be led by small men”. Addressing Bishop Monahan he added, “You must give everything to it, you must lead from the front. You must have more than we need”.

He reminded Bishop Monahan that from this day forward things would never be the same, “the boss is the boss,” he quipped.

Referencing that the clergy were disillusioned, something he said had to be acknowledged he said, “look at us we’re exhausted”. He told Bishop Monahan, “Don’t be too demanding” and added,”You said you would lead us and we need to be led”.

The ceremony itself was a very joyous occasion with music and song throughout. As well as hymns there was a traditional music element added to the musical programme, something Bishop Monahan was keen to include.

It was a ceremony with young people too at its heart and there were also contributions by those with special needs, including representatives from St Anne’s Special School in Roscrea who provided a liturgical movement.

Following his ordination, Bishop Monahan met with the congregation, ahead of attending a celebratory meal.

Carol Byrne is a reporter at The Clare Champion newspaper reporting on news in the East Clare area and the arts. She also covers the courts in County Clare and has received seven national awards for this coverage from the Law Society of Ireland and a National Lottery Local Ireland national media award for Best Community Story 2019. A Masters in Journalism graduate of NUI Galway, she also holds a Bachelor of Arts from the University of Limerick in Music and Media Studies, and a Higher Diploma in Irish Legal Studies. She began her career interning at The Limerick Leader and Clare FM, before taking up a full time post at The Clare Champion in 2006.
@@Carlsburn
Previous Devastated Clare ladies go down by a point
Next Cratloe and Kilmurry-Ibrickane seal final spots