Home » Lifestyle » Bells toll for soldiers of the Somme 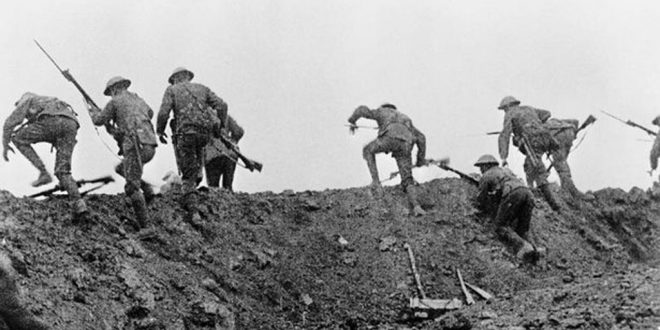 Leaving the trenches at the Battle of the Somme.

THE year 1916 holds a special place in many people’s hearts. Not only was it the year of the Easter Rising, but that same year saw one of the most brutal, and most futile, battles of the Great War, the Battle of the Somme.

To commemorate the centenary of the start of this battle, churches have been invited to toll a funeral bell for 10 minutes from 7.30am on the morning of July 1 (Friday), the precise moment that soldiers climbed from the safety of their trenches to face the awaiting onslaught.

In Limerick, at 9pm today ( Thursday), the eve of the Battle of the Somme, the local branch of the Royal British Legion, with Irish ex-service organisations, will gather at the Limerick War Memorial in Pery Square, where a ceremonial candle will be lit, followed by a symbolic vigil, ending with reflective readings and prayer.

On Friday, at 7.30am, as the church bells are tolling to mark the start of the battle, a second ceremony of remembrance in Pery Square will take place. Everyone who wishes to come along to either or both ceremonies will be very welcome.

Nearly every community across the 32 counties of Ireland was deeply affected by the loss of men at the Battle of the Somme.

The Royal British Legion was established in Ireland in 1925 by those Irish veterans who had returned from the Great War and, for over 90 years, has acted as the principle custodian of remembrance for Ireland’s fallen of both world wars. The charity provides care and support to all British Armed Forces veterans and their families in Ireland who are in need, and preserves the memory of those who did not return.

In the words of Lt Col Ken Martin, chairman of the Royal British Legion in the Republic of Ireland, “The Peal for the Somme is intended as a community event to promote remembrance of those of all nations who made the ultimate sacrifice.”

In Ireland, the RBL is encouraging communities across the country to commemorate the sacrifices made 100 years ago, by holding their own remembrance events to complement commemorative events to be held at war memorials across the UK, France and Ireland, including Dublin, Cork, Waterford, Wexford and Limerick. This remembrance event is one of the many inclusive events taking place internationally and will be an opportunity for people to acknowledge the sacrifice of those who died, or who suffered horrific injuries.

Read all about the 1916 Rising