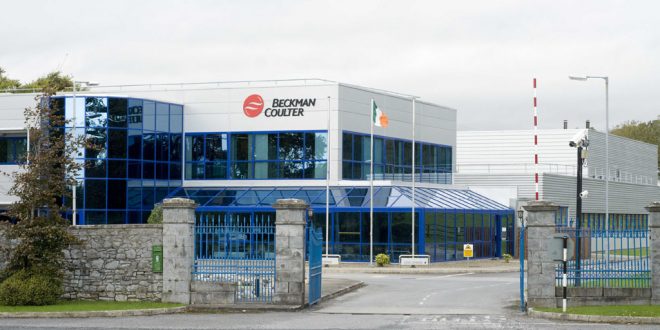 The Beckman Coulter plant in O'Callaghan's is to create over 100 additional jobs.

BECKMAN Coulter intends to expand its operations in O’Callaghan’s Mills by creating a further 105 jobs, as it becomes a second European manufacturing site for one of its medical products.

The California-based medical diagnostics company, which manufactures biomedical testing instrument systems, announced plans in 2014 to close its Galway facility, resulting in job losses and a relocation of some staff to the Clare-based plant.

However, following announcements last year that it intended to increase its workforce by 80 personnel in Clare, it has now confirmed that it intends to generate a further 105 jobs at the site.

Speaking to The Clare Champion, a spokesperson for the company outlined that this expansion is due to growth in one of its product lines, which is called Urinalysis.

“This is a secondary manufacturing site for a product called urine test strips, which are used in instruments that detect abnormalities in the urine that might signal that the person has an illness, such as a urinary tract infection, bladder cancer or diabetes,” she said.

The test strips are also manufactured in Marburg, Germany and the Clare facility will now provide an additional manufacturing site in Europe.

The company was not in a position to give any further details as to what area of the company these jobs would be created or when they would come on stream.

The announcement comes following a planning application that the company has lodged with Clare County Council in which it seeks to extend its facilities in Lismeehan, O’Callaghan’s Mills.

The proposed works include the provision of additional parking for 137 cars, while the proposed development consists of an extension to the existing facility of 6,840m2 gross floor area.

The proposed works also include developing an extended service yard and a new internal service road, as well as additional turning areas and upgrade of the wastewater treatment infrastructure.

A decision on the application is not expected until the end of September at the earliest.