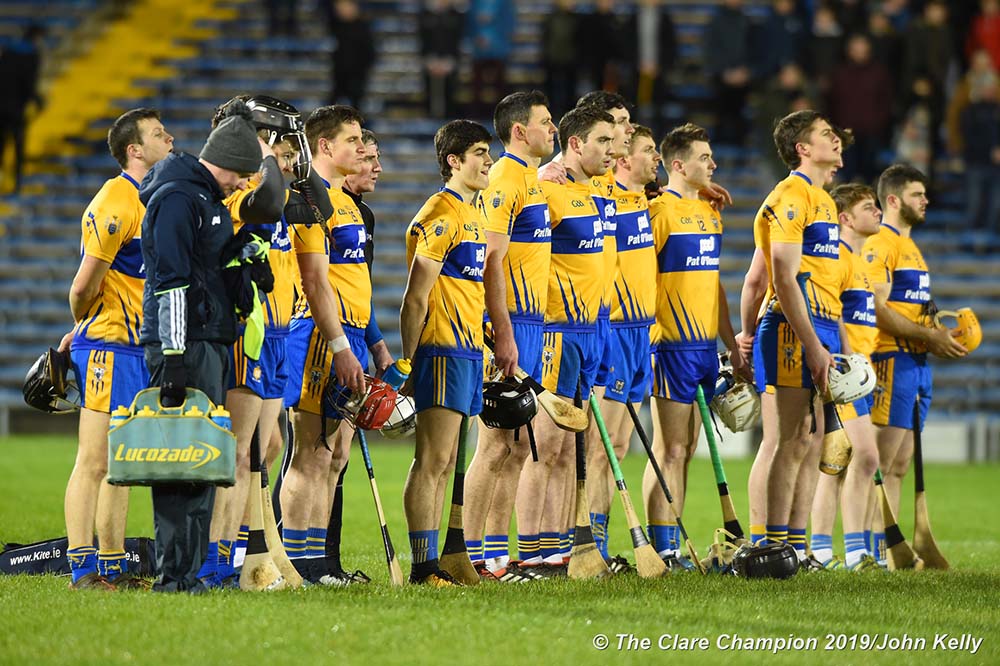 The Clare lads stand for the anthem before their National Hurling League game against Tipperary at Semple Stadium, Thurles. Photograph by John Kelly.

Clare v Tipperary in the hurling championship is the type of rivalry that drags up all kinds of memories.

The beauty of the new Munster championship without question is the home fixture element, which we saw manifest itself at its peak when Limerick came to Ennis last year. Anyone who was lucky enough to get into Cusack Park for that game will remember that atmosphere for a long time to come, even if some us fell victim to the Burco boiler that caused mayhem with the electricity supply as the minor game reached its crescendo.

There was nearly enough electricity around the crowd to make up for it, and this Sunday will be no different. There are always plenty side stories when these two sides meet and events of the last 12 months have only served to add another chapter. The drama of that game in Thurles and the natural desire for revenge that Tipperary will bring to Ennis only serves to heighten an already intense atmosphere. It was not just a defeat to their neighbours last year that cut the Premier, but the fact they bowed out in front of their own supporters will have pushed the blade deeper. It also meant that they could only sit and watch as the epic summer continued without them, with their three Munster rivals going on to be the stars of the show that Limerick would end up headlining.

The re-appointment of Liam Sheedy was a signal of intent from Tipperary that they were going to right those wrongs, and that has borne out so far in this championship season. The signs were there early on, with Sheedy bullish after beating Clare in the National League in Semple Stadium that this was their turf and they were not going to give an inch. It was a marked comment that had its roots in that championship game, and set out the stall that being bullied was not going to be an option this time around. The shoulders have been opened up with some style in their two championship games to date, with 4-58 on the board over the course of their wins against Cork and Waterford.

A notable feature of those wins have been how Tipperary have flown out of the blocks, with Seamus Callanan taking just three minutes to rattle the net against Cork, while they dominated from the early stages before waltzing past Waterford. That is going to be something Clare need to be mindful of.

For all the pride that Tipperary have in Semple Stadium, Clare have even more in Fortress Cusack Park. While that “Fortress” tag has probably become something the media have fashioned, there is no doubt but that the squad and management have adopted that mindset. The summer of hurling in 2018 did much more than just bring Clare hurling back to the big time of Croke Park. It brought back that unique connection between the supporters and the squad, and that connection is going to be vital on Sunday. The full house signs will be up and the Park should be heaving.

All that being said, the message this week has been that the crowd need to be given a wagon to get behind. It is vital that Clare hit the ground running to get the atmosphere whipped up and not allow Tipperary get any head of steam going. Tipperary have been praised for their “total hurling” in their two games, and they know that victory on Sunday will all but assure of them of progression to the All-Ireland series along with a likely Munster final place. Clare need to set out a marker that it will not be allowed to happen on their home patch. There needs to be a clear message delivered that when you are in Cusack Park, you play by Banner rules. It needs to be controlled but ferocious aggression, and every scoring chance needs to be taken to keep Tipperary under constant pressure.

It will be a totally different game to what we saw in Walsh Park, with the wide open spaces of Cusack Park creating more opportunities to make space in front of two frightening forward divisions. From a Clare point of view, it is all about how to make that space for Shane O’Donnell and John Conlon to do the damage, while making sure Tony Kelly has the license to go where he can cause the most trouble. At the other end, the question will be if the return of Conor Cleary means a reshuffle, or will management opt to stick with the tried and tested from Walsh Park. Jack Browne might be required to operate a little closer to goal to try and curb the influence of the likes of Callanan and Forde, while the placing of Colm Galvin is also likely to be a key decision. It is a welcome headache for management to have those choices to make, and match ups will be vital.

It is a game Clare are more than capable of winning. For all Tipperary’s swashbuckling to date, you must examine what challenges they have faced. Cork were flat by their own admission on day one and showed their real potential when bouncing back to beat Limerick in the Gaelic Grounds. Waterford are a team struggling badly for form and came to Thurles off the back of what was a deflating defeat to Clare on a day when they were meant to make a triumphant return to Walsh Park. There is no one questioning the fact that they have been impressive, but there can also be no question but that this is their toughest test yet. The same is true of Clare, but home advantage is not just a clichéd one. Cusack Park is where Clare have to lay down the law, and if they can kick-start this run of three games in 14 days with a positive result, it could very well open up another brilliant summer.