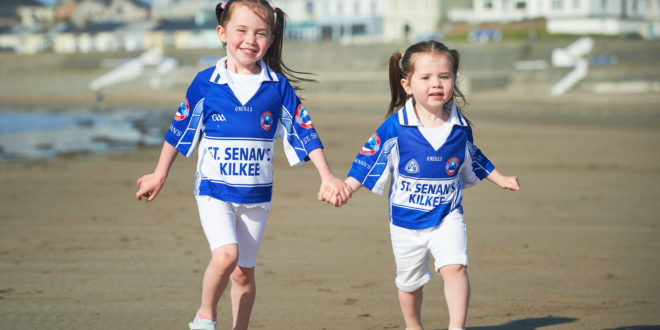 Kilkee sisters Fiadh and Annie Kirwan, who have completed a 5km Big Toddle for Barnardos, raising €1450 so far, having started out with a target of €200. Photograph by John Kelly

When the history of the Covid-19 crisis is being written, our frontline workers will rightly be hailed as the heroes who put everything on the line to keep us as safe as possible.

There will also likely be plenty written about the outstanding charitable efforts which materialised in this time of crisis, with a powerful bond being formed among the Irish people by the manner in which everyone pulled together to help those who needed it most.

When it is written, the names of two West Clare sisters will be listed among those who went that extra mile in order to help others. It is also likely that they will be recognised as some of the youngest heroes of the Covid-19 crisis, with Fíadh Kirwan (4) and Annie Kirwan (2) currently raising funds for the Barnardos charity to support the work they do for sick and vulnerable children. Barnardos deliver services and work with families, communities to transform the lives of vulnerable children who are affected by adverse childhood experiences.

The idea for Fíadh and Annie’s 5km Big Toddle Fundraiser came about from their mother Yvonne who saw the initiative on social media and decided to get involved.

“I came across it on Facebook and thought it might be something fun to do with the girls. We are nearly sick of baking all the time now since the lockdown began so I thought it would be something different to do. We decided to do a little walk with them over 5km and we are breaking it up over five walks of 1km each. I thought it would be lovely to do a little photo album for them while we are doing it that they can look back on in later years and know that they did something to help others during this time. They may not remember it, but they will know that they did it” she explained.

With the scenery in their native Kilkee at their disposal, the choice of venues for their walks was never going to be an issue. There is also added fun with a theme for each of their toddles, including a teddy bears picnic, taking out their scooters to catch up with the alpacas who live nearby and getting up close with one of the fire engines from Kilkee Fire Station. The 1km routes are also helpful for their father Christy Kirwan as the St Senan’s Kilkee stalwart is adding the walks to his pre season preparations for the Blues. That GAA tradition is already being handed down as they donned the blue and white jerseys for their first walk.

Yvonne admits they were surprised by the level of support their fundraiser gathered, and feels the concept of children helping children is a really special cause.

“We had an initial goal of €200, and at the moment we have raised over €1,500 so it really took off which we did not expect and we are really thankful to everyone who has supported it. It was just a little project and something fun for them to do while raising money for a charity while they are doing it. I liked the idea when I saw it because it was something for children to get involved with and the idea of children helping other children is lovely. They love doing it and Fíadh in particular knows that we are raising money for children who need it and she is always asking when we are going out again to walk. It is a bit of excitement for them because they are both out of crèche since March so it is nice to have something to get them out of the house” she noted.

Anyone wishing to donate to the cause can search for Fíadh and Annie’s 5km Big Toddle Fundraiser on Facebook or go directly to the Barnardos website.