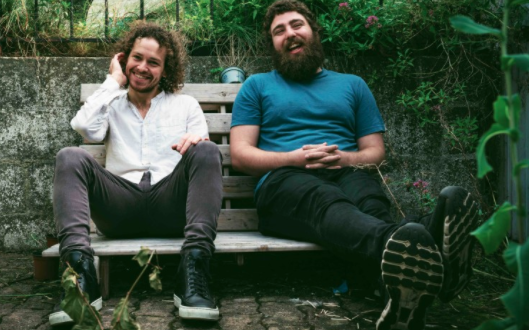 TRADITIONAL Irish music is something that comes naturally to Barefield native Ultan O’Brien. Like many young musicians of his generation, he is steeped in the various styles and the wide repertoire of the Banner County. However, in recent years, the acclaimed viola and fiddle player has been delving into traditions further afield, including those of Scotland, Finland and The Isle of Man. He is also bringing a fresh creative perspective to traditional material in a collaboration with singer Eoghan Ó Ceannabháin. It is a partnership which deepens the connection between the fiddle and the voice – sometimes compared to musical cousins. The duo recently released a debut album Solas an Lae, described as “a unique dialogue that blends raw, rugged earth with the ethereal otherworld”. Meanwhile, Ultan has just recorded a new album with the trio Slow Moving Clouds, who blend vocals and strings on a repertoire of original compositions, interlaced with Irish and Finish material.

Growing up, Ultan was surrounded by masters in the tradition, learning from some of the county’s finest fiddle players. “While I was going to Barefield National School, my teacher was Denis Liddy,” Ultan outlined. “I then went to Rice College where my teachers included Joan Hanrahan. I also took lessons Frances and Mary Custy who used to have classes at the back of the old shop.”

Fleadhanna and festivals, including The Willie Clancy Summer School, also played a huge role in Ultan’s development and confirmed his love for the fiddle and viola. Being from the county town, he was open to and explored the world-famous styles of the East and West of the county. “There are such distinct and beautiful fiddle styles in Clare,” he said. “It’s probably the West Clare style that I would lean towards. I just love it and that’s probably because of Willie Clancy Week. There’s a bit of wildness in the West Clare Music. If you take someone like Bobby Casey, for example, he was a big one for me growing up, especially his album Casey in the Cow House. Nell Galvin too is another player I really admire and I don’t think she gets near enough credit.”

Growing up, Ultan also played classical violin. “It was more to see what it was like than anything,” he said. “I was able to develop new techniques, but I knew I had more of a love for trad.”

As well as exploring different genres of music, Ultan became more interested in learning about the place of the fiddle in different cultures and societies. “Almost every culture has some kind of fiddle music,” he noted.” An opportunity to broaden his knowledge came through Ultan’s long-time involvement with the band, Skipper’s Alley, of which Eoghan Ó Ceannabháin is also a member. “We were working with the Manx singer, Ruth Keggin, and that lead to us working with Aon Teanga, a project looking at the connections across traditions from the Isle of Man, Scotland and Ireland.”

A meeting at the Watercolour Music studios in the Scottish Highlands produced a collaboration between Ultan, Eoghan and Ruth, along with Mary Ann Kennedy, one of Scotland’s most influential musicians and co-owner of the studio.

“If you listen carefully, you’ll understand some of the Manx language,” said Ultan. “They seem to use a lot of -y and -k sounds in places where we wouldn’t have them in Irish. The language isn’t spoken that much, but there is a revival now on the Isle of Man.”

The work in Scotland also sparked the collaboration between Ultan and Eoghan, under the guidance of Mary Ann and her music producer husband Nick Turner. “It all happened in Scotland really,” Ultan said. “There was a real sense of escapism there in the Highlands. It’s an amazing spot. Working with Nick and Mary Ann, who is a harper as well as a singer, we got great advice and found songs and tunes suited to strings and voice.

“I suppose what we’re aiming for is balance rather than simply accompaniment,” Ultan noted. “In some pieces, Eoghan lilts, for example, and the strings come to the fore. We’ve used lots of different tunings on the viola and put a lot of work into getting the right colours between the strings and the voice.”

Solas an Lae was recorded in March 2019 with hopes of a 2020 launch. As with a touring and festival schedule that would have taken Ultan around the world, the pandemic has pressed the pause button. “We would have been going back to Scotland soon, if Covid hadn’t happened,” he said. “We had a virtual launch of the album at the end of last year and when the time comes, we will tour it.”

The album will come out on vinyl, which Ultan noted is now selling better than CDs. “It’s more expensive to produce,” he said, “but we saw there was demand and pre-orders.”

A single ‘Cúirt Bhaile Nua’ has also been released. That is described as a classic traditional song of love and heartbreak from Mayo, associated with acclaimed singer Treasa Ní Mhiolláin.

Video footage shot in Scotland has been edited by Nick and recently released too for the single. The piece is composed of night-time video, filmed outside at Watercolour Music’s studios, on the shores of Loch Linnhe within sight of the highest mountain in the British Isles, Ben Nevis. Promotional material describes the video as “eerily elemental” with “an almost sacrificial scene of a harmonium up in flames”. It also warns that, “Instruments may have been harmed in the making of this film”.

Exploring Nordic traditional music has also been a passion for Ultan who is a member of the highly acclaimed Slow Moving Clouds. Described as ‘post-folk,’ fellow members are Aki on nyckelharpa and vocals and Kevin Murphy on cello and vocals.

“We were lucky enough to get into studio during Level 3 restrictions,” Ultan said. “We have a new album, but don’t know when that will be released. Our style is a mixture of Finnish and Irish tunes and the new album includes some of our own writing. We all have backgrounds in trad, but it’s not strictly trad and we’ve got instruments like the nyckelharpa. A lot of Finnish traditional music is polka based. It’s really interesting. There are some similarities with Irish trad, but the keys and tonal structure are different and the sound is very distinctive.”

The Slow Moving Clouds collaboration has given Ultan the opportunity to travel to Finland. “It’s just amazing and I realise I’m better suited to the cold Northern climate than the likes of the Mediterranean,” he said. “It’s also been amazing to see the Finn’s appreciation of Irish traditional culture.”

As for everyone in the arts, the pandemic has created challenges in terms of live performance and reaching audiences. “We were just back from New Orleans when the pandemic hit,” Ultain said. “We were lucky to get back because I had a lot of friends working on cruise ships who were stranded. We were due to tour North American and Canada and it looks like it’ll be some time before that’s possible. I suppose you have to take whatever positives you can, we did manage to keep the work going during the pandemic. We go time to create and record material.

“We have had some live-streamed gigs, which was great, but they’re just not the same as live in-person. We also took part in Samhlú 2020 for TG4, which was hosted by Tommy Tiernan and great fun.”

Dublin-based Ultan said the capital has never been so quiet. “I’ve been here pretty much for the whole of the lockdowns and the city has never been so peaceful. It’s been amazing to see things like urban foxes, and makes you realise how noisy Dublin normally is.”

With the new album awaited from Slow Moving Clouds and a vinyl version of Solas an Lae coming out in March, Ultan will have a busy time to look forward to post-pandemic. “The work with Eoghan has been really important to both of us in terms of our development,” he said. “It’s not too experimental. We’re going back to our roots. Slow Moving Clouds has a whole different feel, but it’s important to have some spice in life.

“We will tour Solas an Lae after the pandemic and have Irish, UK and European festivals in mind, but it’s the home-based gigs I’m looking forward to the most.”

Fiona McGarry joined The Clare Champion as a reporter after a four-year stint as producer of Morning Focus on Clare FM. Prior to that she worked for various radio, print and online titles, including Newstalk, Maximum Media and The Tuam Herald. Fiona’s media career began in her native Mayo when she joined Midwest Radio. She is the maker of a number of radio documentaries, funded by the Broadcasting Authority of Ireland (BAI). She has also availed of the Simon Cumbers Media Fund to report on development issues supported by Irish Aid in Haiti. She won a Justice Media Award for a short radio series on the work of Bedford Row Project, which supports prisoners and families in the Mid-West. Fiona also teaches on the Journalism programmes at NUI Galway. If you have a story and would like to get in touch with Fiona you can email her at fmcgarry@clarechampion.ie or telephone 065 6864146.
Previous Claims and counter claims over face masks memo
Next New Macra branch for Ennistymon