Home » Regional » Roaring on the Banner 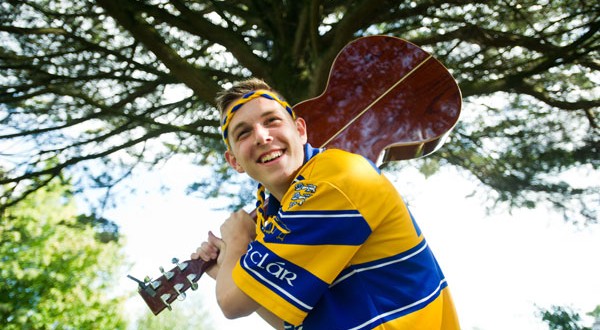 Roaring on the Banner

Eighteen-year-old Noel McInerney, who lives in the Millstream Housing Estate in Killaloe, did not envisage his tribute song to the Clare team’s hurling efforts
The Banner’s Road To Croker would prove to be an internet hit. At the time of writing, the number of hits was at an impressive 59,728. The song is set to feature on the RTÉ News this Thursday evening, while it is expected a clip will also be played on Up for the Match on Saturday night.

A casual conversation with his father Willie, who is a caretaker at the local Waterman’s Alzheimer Respite and Day Care Centre, about the All-Ireland semi-final between Clare and Limerick got Noel thinking about a song for the final.

Within minutes, he had the chorus written down on his phone and composed the entire song within two hours.
“The reaction has been amazing. People are comparing it to Jimmy’s Winning Matches, which is fantastic.

“I used my own camera to record the song and used my girlfriend’s computer to upload it on the internet,” he said.

A cut-out of Mrs Brown from the television sitcom Mrs Brown’s Boys features prominently in the background of the recording, which shows Noel singing with the aid of his guitar.

Mrs Brown is a huge hit in the McInerney household and she was dressed in the Clare colours after the discarded cut-out was obtained by Willie at the end of a wedding ceremony.

The Banner’s Road To Croker will get plenty of rousing renditions from Noel on the match bus to Croke Park, when he travels with a large group of friends and neighbours on Sunday.

He is confident of a Clare victory. “I think Clare can win the final. Clare have a young team with buckets of potential. Even if Clare are defeated, I will not be too disappointed because the hurling team has already made the county proud,” he said.