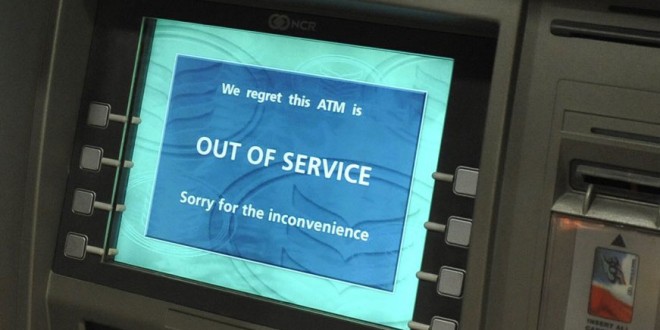 Banking issues could be ‘a serious crisis’

THE lack of ATM services over the Christmas period and banking services in general in East Clare has the potential to become “a serious crisis”, according to local councillor, Pat Hayes.

Councillor Hayes highlighted the issue after the two primary towns in the area, Scariff and Tulla, experienced intermittent outages of ATM services over Christmas and into the new year.

“The Friday before Christmas, the ATM in Scariff in the bank and outside the bank were out of service. All over the place, there seems to be huge closures of services to the public. It is a continuous thing.

“There are two ATMs in Tulla, the one inside the bank was out of order over Christmas and there’s the one in Supervalu, where there is a maximum withdrawal of €120. There were a lot of complaints about it. There were issues still the following Monday and they were out of order several times since,” Councillor Hayes said.

He continued, “What I’m worried about is that all the banks are trying to get people to use the ATMS and then they are not being serviced to the level they should be. We were all trying to shop local at Christmas and around the New Year and when you can’t get cash locally, it militates against supporting local communities.

“I think the banks in general need to review where they stand in terms of this. If you can’t provide customer services and counter services, you should ensure that ATMs and bank facilities are available to people all of the time. I think it is a serious crisis that is coming down the road in terms of services in the financial sector for rural communities”.

He added that on St Stephen’s night, he was in Ennis and experienced it for himself when he found four ATMs were out of order in the town.

In a statement issued to The Clare Champion, Bank of Ireland, which is the only bank to have a branch in Tulla and Scariff, outlined that it “is the primary provider of branch banking and ATM services to communities across the county and always seeks to provide a very high level of service”.

The spokesperson for the bank said, “We understand the inconvenience that any disruption to service can cause and wish to reassure customers that we remain committed to providing these vital services and have taken immediate measures to ensure that Tulla and Scariff ATMs meet these standards. We would also ask customers to bear in mind that we are often the only bank serving many of these communities when others have withdrawn”.

She confirmed that Scariff had two hardware issues over the Christmas, one on December 20 at 9.47am, which was resolved at 7.33pm, as it required an engineer to attend and for parts to be replaced.

The second incident occurred on December 28 at 12.12pm. She said this issue was complex and due to access restrictions over the closed period, resolution was delayed until 4.10pm on December 31.

Similarly in Tulla, the bank’s ATM had two hardware issues over the Christmas period. The first occurred on Monday, December 23 at 5.40pm and this issue was resolved the next day by 1.30pm.

The second issue occurred on Saturday, January 4 at 9.43am and was resolved by 10.32am.

“Additional measures and plans are put in place each year during peak trading times by Bank of Ireland to minimise the impact of any ATM issues to the customer but, unfortunately, complex issues do arise that require qualified engineers to attend in order to resolve,” she continued.

She added that Bank of Ireland also provides a range of other options for customers to access cash during such outages, such as retailer ATMs in local stores, cash back at retailers and the option of transferring cash to other accounts via online and mobile banking services.

Councillor Hayes said while he did not intend to criticise local bank branches, he believed there were more outages than what Bank of Ireland had mentioned, as he said a lot of people contacted him on the issue.
“They are worrying about finances; when they need to get it, they can’t get at it. I think there is a greater issue at play here in terms of the financial services that are available. I’ve met a lot of older people and I feel there needs to be a national movement because the public have paid for the banks and there is a big risk in the future that some of the local branches won’t be there.

“Customers want to meet with branch officers in terms of lodging money and there is a whole change in that as well, because there is only customer services available to people on certain days and cash on other days. You can’t get a bank draft in certain banks for less than €500. This is a warning to the public themselves and for politicians that people need to make this issue known nationally,” he said.

He believes the Central Bank has a role to play in terms of the provision of services and that the withdrawal and changes to service provision “affects rural communities more than anyone else”.